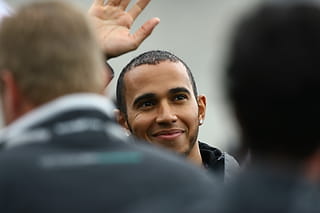 Formula One driver Lewis Hamilton swapped four wheels for two this weekend when he was spotted visiting the fourth round of the MotoGP at Le Mans.

Although best known for driving fast cars, the 2008 F1 Champion has admitted that he’s a big fan of motorcycle racing, although he’d never been to a MotoGP event before.

Hamilton was keen to support fellow British motorsport star Cal Crutchlow, who clinched a superb second place finish in today’s race, despite riding with a fractured tibia, and also spent time meeting some of GP’s biggest names including Valentino Rossi and Jorge Lorenzo.