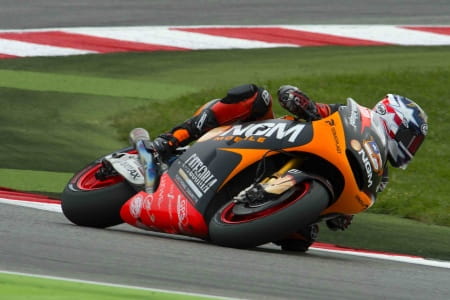 When Yamaha announced they’d be providing NGM Mobile Forward Racing with what is essentially a pair of 2013 Yamaha M1s to run with the DORNA spec-ECU it stirred the MotoGP paddock. A Yamaha M1 with 4 litres extra fuel and the possibility of softer tyres? Even without Yamaha’s ECU… it sounds dangerous, no?

It sounds even more threatening when you put a decent rider on it… and that’s exactly what Forward Racing are planning to do. If paddock gossip is to be believed, they are soon to confirm Aleix Espargaro will switch to the team from the Power Electronics Aspar outfit. Having already been under contract for 2014, Espargaro will now have to pay Aspar €400,000 euro to be released.

Alongside the elder Espargaro brother will be double World Superbike Champion and former factory Yamaha rider Colin Edwards. The American currently rides for the NGM Forward outfit and had been tipped to be ousted from the squad for 2014 on the orders of Yamaha, who are keen for young talent to take on the machines. However, it seems a decision has been reached which will see a mix of upcoming youth (Espargaro) and experience (Edwards).

While this is yet to be formally announced, our sources tell us confirmation is due shortly.