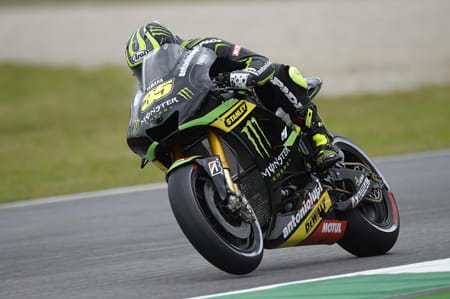 Cal Crutchlow got his weekend at Italian track, Mugello, off to a flying start by finishing in the top three, just 0.3 seconds behind factory Yamaha riders, Jorge Lorenzo and Valentino Rossi.

Brit lad, Crutchlow, made up eight seconds in the afternoon session after a difficult morning session due to a damp and drying track. Crutchlow had one of the best weekends of his MotoGP career at Le Mans last weekend. He agreed that it was a very positive start to the weekend and was happy to be so close to the leaders:

“This afternoon I was able to be in the top three in the dry and that is also very positive, but it is going to be very difficult to beat Jorge and Valentino. Jorge is looking for a third straight win here, so he is very fast on this track, and Valentino obviously has some special motivation for his home race. But I am the best of the rest again, which is a good sign and we’ve still got some things to try to improve the bike.”

Unfortunately, rookie team-mate Bradley Smith couldn’t quite round off a good day for Tech3 after he had a big crash while trying to cement an eighth place finish.

Smith had an impressive morning session by finishing FP1 with the 6th fastest time. The Oxfordshire rider was also looking confident at the start of free practice two but crashed out on turn 15. Although he will need treatment for his damaged finger, he is braving the race on Sunday and has a skin graft planned on Monday…