"Proper victory" for Redding as he does the double! 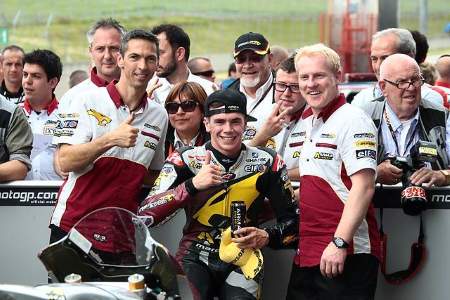 Forty-two years after a British rider won consecutive races in the intermediate class, Redding matched Rodney Gould's efforts from 1971 by following up on his victory at Le Mans two weeks ago to extend his championship lead by taking a very well deserved victory today.

"It's unbelievable - I felt like I controlled the race today, it's such a physically demanding track given my size", said Redding.

Despite destroying his bike during Free Practice on Saturday morning, caused by a change in set-up including trying a hard front tyre, the MarcVDS team worked solidly to get Scott a virtually new bike ready in time for qualifying.

"I didn't expect them to get it ready in time but we figured out the set-up and I managed to go even quicker" said Redding as he stuck his re-built bike on pole position.

After the traditional late arrival to his grid position after the warm-up lap ("I like all my opponents to see me arriving"), Bike Social-supported Redding dropped a place by Turn 1 and followed Nakagami for two laps before making his move back up to the front.  The Japanese rider slipped back and then slipped off into the gravel trap allowing Nico Terol and Johann Zarco to challenge Redding's supremacy. Terol did his best to disrupt proceedings and took the lead for a handful of laps before the Gloucestershire man exerted his authority by taking the lead and pulling out a 2.2s gap to take his second victory of the season and his fourth visit to the podium from the five races so far in 2013.

"I didn't understand how or why he [Terol] went past me then was so slow, so I just saved the tyres for a bit and he then waved me through!" Scott continued.  "I thought he would try and follow me and then get the slipstream down the straight so I just pinned it and made a good gap.

Asked to describe the race in three words, Scott replied: "Very confident boosting" and the MarcVDS rider now leads the Moto2 World Championship by 43 points as they head to Catalunya for the next race on 16 June. However, he fears the "Spanish mafia" will up their game in front of their home crowd as he guns for a hat-trick of wins.