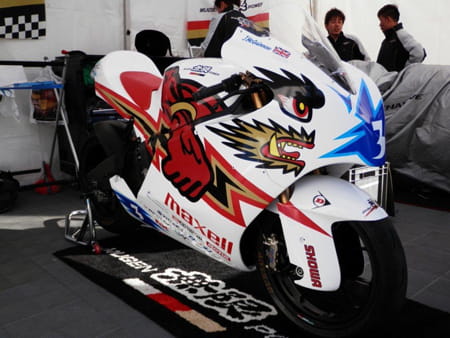 John McGuinness has swapped his usual speeds of 130mph aboard a Honda CBR1000RR Fireblade on the Isle of Man for an average of 105mph… on the striking new Mugen Shinden Ni machine, which he’s contesting in Wednesday’s one-lap TT Zero electric race.

Nineteen-time TT winner John McGuinness, who is targeting his 20th TT career win on the island this week, has already topped the timesheets during practice for the electric class ahead of rival Michael Rutter, who is contesting a MotoCzysz.

Apparently, the new Shinden Ni is said to weigh as much as 44lbs less than its predecessor, thanks to a new frame, swingarm, motor and battery pack. “Although it does have a few parts in common with last year’s, the new bike is lighter and has greater speed and agility,” previously commented McGuinness. “It’s more comfortable to ride, because they have changed the shape of the tank. There is a rear brake, but I’ve never used it. And then no gears: you just jump on and go as fast as you can!”

For our full story on the Mugen Shinden Ni machine, click here