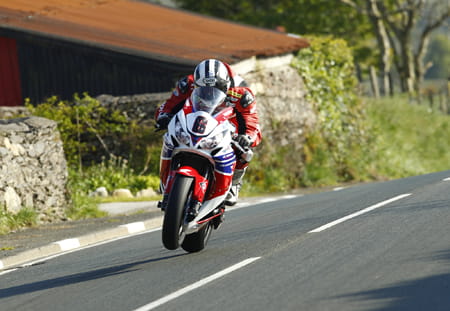 The changeable weather conditions throughout practice week have brought about the postponement of the six-lap Superbike TT from this morning to a 2.15pm start on Sunday afternoon.

The decision was made by clerk of the course Gary Thompson as practice in dry conditions had been limited. He explained: “I have discussed with a number of riders the unsatisfactory and inclement conditions of practice and feel uncomfortable to run the Superbikes with them having had just one session in the dry. They will now have another practice session during Saturday with the race on Sunday afternoon but the Sidecar TT race will go ahead as scheduled on Saturday.”

Adding to the problems and frustrations, the Friday evening Superbike session was delayed because of a serious house fire in Kirk Michael, but once under way it was Honda TT Legends rider Michael Dunlop who made the running. His first lap was at an average speed of 127.68mph and he improved on that with a time of 17m 36.879s – a speed of 128.52mph

Gary Johnson, riding a Honda, lapped at 125.189mph while William Dunlop on the Milwaukee Yamaha put in a lap of 124.856mph, while John McGuinness, the fastest rider across the week, put in two steady laps, the best of which was at 123.212mph. Newcomer Josh Brookes recorded a lap in 120.22mph aboard the Tyco Suzuki.

The Sidecar race will go ahead today as scheduled with a 2pm start.