Finally a dry practice at the TT... 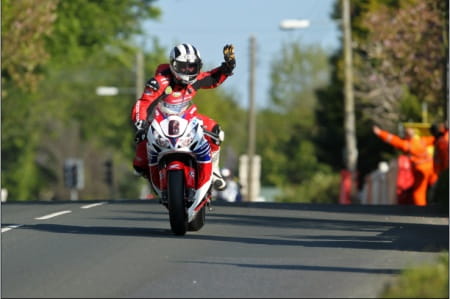 John McGuinness topped the TT Superbike leaderboard in the first dry practice of the week, clocking a best time of 17m 30.299s to cover the 37.73-mile Mountain Course on his fourth and final lap of the session aboard the Honda TT Legends Fireblade at an average speed of 129.323mph.

The Lancastrian, already a 19 times winner on the Island, and the holder of the outright lap record, had begun, by his standards, a little slowly but as Kiwi Bruce Anstey increased his speed, lapping at 129.143mph, McGuinness responded nosing ahead.

In Supersport practice, the Dunlop brothers made it a family affair. Michael with a lap in 122.671mph on his Honda three-and-a-half seconds faster than Yamaha-riding William, who lapped at 122.259mph.

And in Sidecar action Dave Molyneux/Patrick Farrance set the pace, at 113.558mph ahead of Tim Reeves/Dan Sayle whose best lap came in at 113.146mph before the session was red-flagged by a crash at Graham Memorial involving newcomers David Saunders and Anne Garnish, who were subsequently taken to Nobles Hospital for treatment.