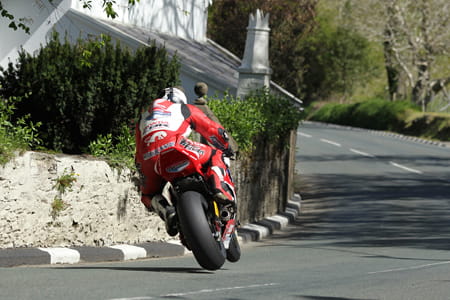 Michael Dunlop made good use of the additional practice time given by re-scheduling the Dainese Superbike TT to Sunday afternoon as he powered in his fastest ever lap of the Mountain Course at an average speed of 130.85mph, despite a bird strike on Saturday.

That put him six seconds faster than his Honda TT legends team-mate John McGuinness who is chasing a 20th career victory on the island.  Honda riders Gary Johnson and Bruce Anstey both lapped in excess of 129mph while fans’ favourite Guy Martin, aiming for maiden TT glory, clocked the fifth best time at an average speed of 128.680mph.

Meanwhile, Tim Reeves finally achieved his long time ambition of winning a Sure Sidecar TT race as he romped 20 clear of Conrad Harrison/Mike Aylott in the three-lap race – a result that he reckoned matched or bettered his four World Championship titles.

“You can’t imagine how much this means to me – my hero is Jock Taylor and he won the TT when he was World Champion, and now I have done that,” said Reeves. “Winning this TT matches if not betters my world titles – it is something that I have always wanted to achieve and it has taken some doing. You need the whole team behind and with you – we had the whole package.”

His passenger Dan Sayle, who matched the record of eight wins by Rick Long, admitted their relief: “We were a bit concerned before we went out as there was a bit of a crack on the engine which had been repaired with gum so it was a bit on an unknown, but we have the win.”