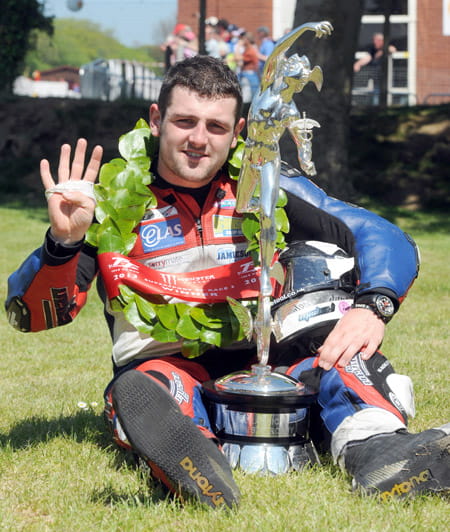 Michael Dunlop continued his Isle of Man TT winning spree with another sensational last lap charge around the notorious 37.73-mile Mountain Circuit to complete a Monster Energy Supersport TT double and make it four wins from four starts in this week’s festival.

Riding his own MD Honda, Dunlop was locked a furious power struggle with Kiwi Bruce Anstey who lead all of the way to Glen Helen on the fourth and final lap before Dunlop really asserted himself and in the eight miles to Balluagh Bridge turned a 1.48s deficit into a lead of 1.5s.

It was another amazing ride by the 24-year-old Ballymoney rider as he powered in a lap record-busting 128.667mph final lap to secure his seventh victory on the Island by a little over two seconds from Anstey.

“The bike was not feeling good at the start, but come the last lap I had to go for it and to win this second 600 week is just fantastic,” said Dunlop.

John McGuinness claimed his 40th TT podium as he snatched third from William Dunlop on the final lap.

Michael Rutter won the SES TT Zero race for a third time in as many years, taking his victory tally on the island to four, as he overcame the challenge of John Guinness with a rapid descent of the mountain to change a deficit of nine seconds into a winning margin of 1.672s.

“Just fantastic to beat John – I didn’t expect to do this in a million years – it was close wasn’t it but this is awesome for the team,” reflected a delighted Rutter, who had upped his own lap record to 109.675mph.

The Birchall brothers, Ben and Tom, avenged their disappointment of Saturday’s first Sure Sidecar TT when a puncture, after clipping the bank at Kates Cottage, caused their retirement but leading throughout the second race to take a comfortable win ahead of Dave Molyneux and Patrick Farrance.