Dunlop does the hat trick! 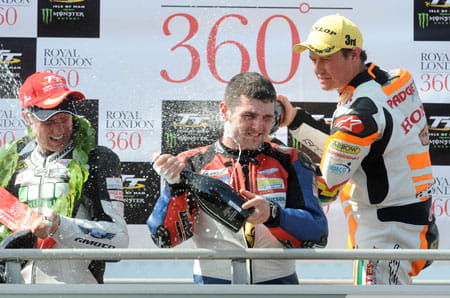 Michael Dunlop completed the daily double as he took both the Monster Energy Supersport and Royal London Superstock TT victories at race record speeds, in the process making it three wins from three starts in this year’s festival.

He had reeled in his older brother William, who had surged into an early lead in the Supersport race, to be running at the top of the leaderboard by the time he reached Ramsey on the opening lap. From that moment he was able to control the race taking the victory by a little over ten seconds from Bruce Anstey.

“I got my head down, the Honda 600 is a lovely bike, and just pulled a gap on Bruce but knowing he was there ensure that I maintained my concentration,” explained Michael Dunlop, who was joined on the podium by William who took third place on the Milwaukee Yamaha ahead of John McGuinness.

But in the Superstock race, Gary Johnson riding his Kawasaki, dominated the opening three laps, holding a comfortable three-second advantage going into the final lap, but Dunlop was full of fight and fire, powering in a remarkable lap record busting average speed of 131.220s, also bettering the race record time.

Johnson took second well ahead of McGuinness while Guy Martin, in third until the mid-race re-fuelling halt, picked up a 30-second penalty for speed into the pit-lane and subsequently pulled out at Glen Duff.

These three victories take the Ballymoney rider’s TT haul to six races, one more than his late father Robert.