Bike Insurance Specialist, Bennetts, has announced a deal with the Isle of Man Government to be the headline sponsor of the Classic TT which runs from 23rd – 26th August.

A “major multi-year deal” has been agreed which will include title sponsorship of the main race of the event, the 500cc race which will feature TT heroes such as John McGuinness, Guy Martin, Michael Dunlop, Bruce Ansty, Conor Cummins and Cameron Donald all racing against Manx GP regulars.

The bikes on show over the three races and Lap of Honour come from marques including Paton, Matchless, Norton, MV Agusta, BSA, Moto Guzzi, Ducati, Vincent, AJS, Aermacchi and the established Japanese manufacturers, Honda, Kawasaki and Suzuki while the world renowned Yamaha Classic Racing team will also be participating in their first and only competitive race meeting before being disbanded. 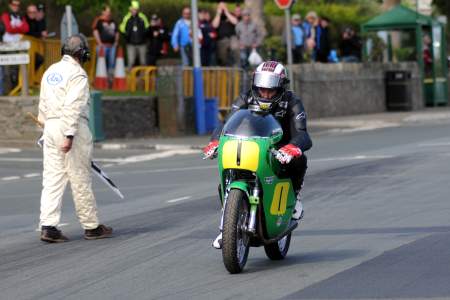 Don’t worry if you can’t make it to the Isle of Man over the bank holiday weekend in August because ITV4 will be showing a two-hour programme with all of the main highlights – with Matt Smith taking over from Craig Doyle as the main host alongside Steve Parrish, Jamie Whitham and Steve Plater.

Bennetts has upgraded its classic bike insurance cover and can now quote for motorcycles from 1900 onwards online and through their call centre.  The broker has a long association with the TT Races, which began in 2007 when the company was the title sponsor of the Centenary TT.  In recent years Bennetts has been the ‘Official Insurance Partner’, as well as using its Government petition campaign to sponsor the Lightweight TT in 2012.  In 2013 it this very website that backed the Lightweight, known as the ‘BikeSocial.co.uk Lightweight TT’.

Laurence Skelly from the Isle of Man Government Department of Economic Development for Tourism and Motorsport commented: "To have attracted the support of a major UK brand in Bennetts is a real boost to the event in its first year. The company is already a valued partner of the TT Races and we look forward to working with Bennetts at the Classic TT as well."