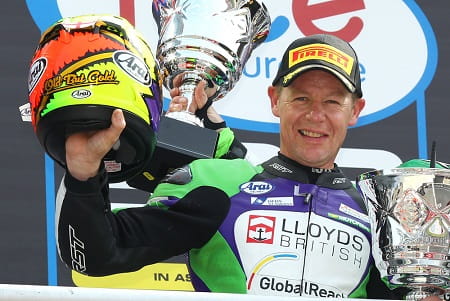 Walker famously lost out on the British Superbike title at Donington in 2000 despite starting the final race on pole position and boasting a 21 point championship lead. All the Nottinghamshire rider needed was a single point but an engine blow up for his Crescent Suzuki put pay to his title aspirations, gifting the crown to GSE Ducati’s Neil Hodgson.

14 years later, Donington Park once again played a pivotal role in Walker’s racing career – this time the deciding venue for the 2014 British Superbike Showdown contenders. After a strong season with the Lloyds British GBmoto Kawasaki outfit, Walker’s showdown spot was all-but-confirmed ahead of Donington but from past experiences, the forty-something year old wasn’t going to rest upon his laurels. 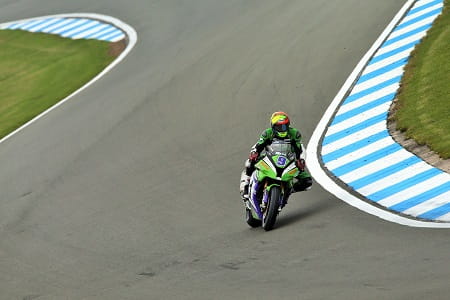 “Coming here has made it a lot worse as you just think history will repeat itself” confessed Walker speaking to Bike Social. “Fourteen years ago on an equally beautiful sunny afternoon I had pole position and a 21 point championship lead; you wouldn’t believe it could go wrong. That taught me never to be complacent so even though I had a bit of a cushion coming into the showdown you just never know.

“I’ve been panicking and literally wrapped myself up in cotton wool these past few weeks, I’ve not been on my mountain bike, my motocross bike and I’ve even jogged slower on the running machine so I wouldn’t fall off the back of it! I’m so glad we’re in the showdown, for me, for GBmoto and for Kawasaki. There are a few people that maybe didn’t think I could do it at my age but it goes to show that age is but a number, old but gold!”

The British Superbike Showdown system closes up the points gap between first and sixth in the title fight, meaning the Stalker has a shot at fighting for the British Superbike title for the first time since that fateful day in 2000. He says he’s focused so much on getting into the showdown, he hasn’t given much thought to a plan for the final three rounds. 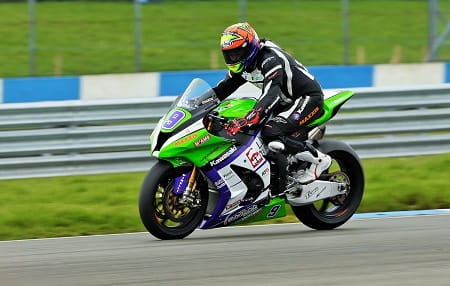 “Because it’s been such a fight to get into the showdown and by no means definite until today, I’ve not really thought much beyond this round so now I have to re-evaluate my goals. There are obviously three favourites despite the rules, Shakey already has a strong lead and Brookesy and Kiyo are way ahead of us boys too but [Alex] Lowes just scraped into the showdown a few years ago and nearly won it so you never know!”

2014 is no flash in the pan for Walker, he’s shown pace good enough for the showdown in the past few years but technical gremlins quashed any chance of securing an all-important top six spot.

“Pete from Bournemouth Kawasaki [former team boss] came to see me after race one and said he was chuffed to bits for me to be in the showdown and did say that I should have been in last year. Technical issues happen but I’m a big believer in what is meant to be will be and last year it wasn’t meant to be but today it was.”

The British Superbike Championship now heads to Assen, another circuit synonymous with Walker’s career as the scene of his debut (and only) World Superbike victory back in 2006.

“I’ve had my day around Assen, I scored my one and only World Superbike win around there, it’s a phenomenal circuit. I love Silverstone too to be honest and Brands Hatch GP is one of my favourite, so I’m looking forward to the next three rounds! I hope the weather is going to be kind for us as there’s all to fight for, the team have been developing the bike all year and they’ve a few ideas for the next few rounds so fingers crossed!”

He might be cracking on a bit but still able to run podium pace, Walker says his intentions are to remain in the British Superbike Championship next season should he be able to compete on competitive machinery.

“The plan is to be back next year if I can be here with the right team” concluded Walker. “I’m hoping GBmoto will be interested in keeping me on now I’ve made the showdown. If I can get a competitive bike I’ll stay, I’ve been spoilt this year, it’s been like being in a factory team like the good old days. I’ve had some good seasons but this season has been a real step up. I’m not here to make up the numbers.”