Kiyonari: "I made a stupid mistake" 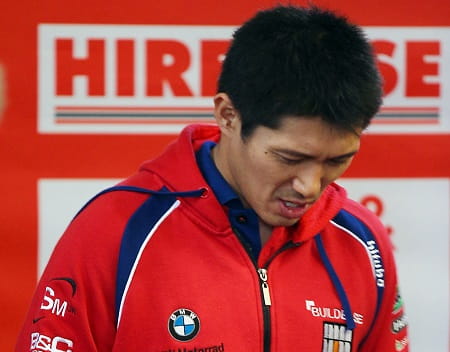 Ryuichi Kiyonari has branded the free practice crash in which he suffered a fractured collarbone as a ‘stupid mistake’ after missing out on the title to Shane Byrne.

Kiyonari fell from his Buildbase BMW S 1000 RR in the third and final free practice session on Saturday morning, landing hard on his shoulder and suffering an undisplaced fracture to his collarbone. The injury ruled the Japanese rider out of both the qualifying session and Saturday’s first race, putting his title hopes in jeopardy.

When the conditions on Sunday morning were just as bad, Kiyonari opted not to ride in either warm-up or the second race, in which Byrne took victory to claim his fourth British Superbike title.

“I’m fine, my shoulder hurts but I’m fine” said Kiyonari talking to Bike Social at the end of the day. “Sunday wasn’t as difficult as Saturday and Saturday night. I slept very well, nearly ten hours but whenever I woke up I remembered what had happened. For sure, I’m in pain but there is more pain in my head. It’s a hard time! It was hard making a decision on whether to ride, I wanted to go out in morning warm up but the conditions were not so good. Race one was also a bit wet so I decided not to risk it and then Shakey won the championship.

“It would have been hard to take the title in the first place; I needed three wins so when Saturday morning happened it was almost impossible. We had a big chance but I made a stupid mistake and destroyed everything and I’m disappointed about that.

“I’ve enjoyed every race this season and I’m happy to finish in second, next year I have a new target!”