Historic pole for Iddon and Bimota in BSB 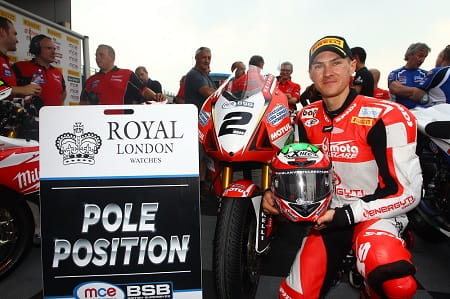 Christian Iddon made history this afternoon as he bagged Bimota’s debut pole position in the British Superbike Championship at Assen.

Wildcarding in this weekend’s 10th round of the British Superbike Championship after his Alstare Bimota team failed to meet World Superbike’s homologation requirements; Iddon has shown top ten pace throughout the weekend at a circuit he’s already ridden with the BMW-powered Bimota BB3.

With thunder rumbling above the 2.542 mile Dutch circuit ahead of qualifying, doubts were cast over whether all three sessions would remain dry. Iddon progressed through the first session before the rain came down mid-way through Q2, catching some riders off guard with Shane Byrne and Peter Hickman crashing out.

As there had been no wet practice session across the weekend, race direction extended the final ‘Q3’ session to twenty minutes with ten of them untimed to allow riders to familiarise themselves with circuit conditions. 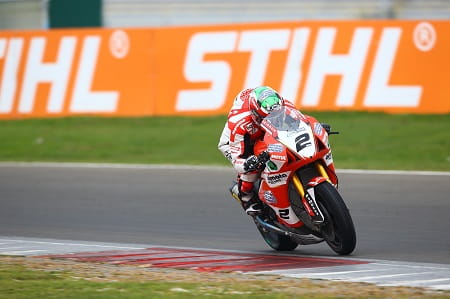 A solid 1’52.261 from Iddon was enough to secure pole position with his closest rival, Ryuichi Kiyonari crashing out on his fastest lap. John Hopkins took second place ahead of Tommy Bridewell.

The Alstare Junior team introduced Bimota to the British Superbike Championship back in August with French rider Christophe Ponsson, who achieved a best result of 20th at Oulton Park.

“This is a surprise! It’s nothing to get too excited about as we still don’t have the pace in the dry” said Iddon. “The guys only got the wiring loom on Thursday afternoon so they’ve done a great job to get us out there. Pole is a little bit of a godsend really.

“I just went out there and enjoyed it, as soon as I worked out what the rules were I went out with 15 minutes to go. It was clear straight away that there wasn’t much grip, the first sector was pretty much dry but the back section was fairly wet. It was getting drier and drier and I was surprised to be on pole with the last lap as I made a bit of a hash brown of it. I did the whole back section a gear too short as I missed a gear. This is a pleasant surprise so a massive thanks to the Alstare Junior squad for letting me come race and hopefully they’ll let me do a few more.”