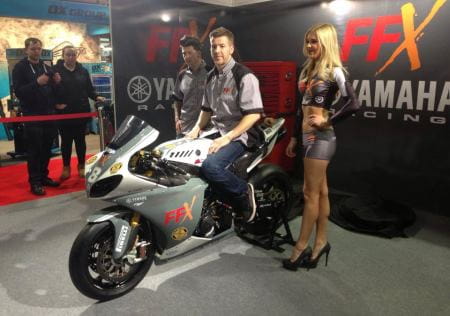 FFX Yamaha has lifted the covers off Ian Hutchinson’s 2014 British Superbike contender. The eight-time TT winner will campaign an SMR prepared Yamaha R1 for the Gary Ekerold-run squad in BSB alongside his international road racing duties for the Milwaukee Yamaha team at the North West 200.

With it looking increasingly unlikely that Hutchinson - who stormed into the record books in 2010 after taking five TT victories in a week - will compete at the 2014 TT, his full British Superbike campaign is set to be a priority this season.

Hutchinson had been penned in to compete in British Superbikes for the 2012 season alongside Tommy Hill in Muir’s Yamaha outfit but was forced to relinquish the ride after re-breaking his leg during a practice run for MCN’s ‘Revolution’ live action show in January. The initial leg break had come during Hutchinson’s last circuit-racing appearance in the British Supersport championship at Silverstone in 2011.