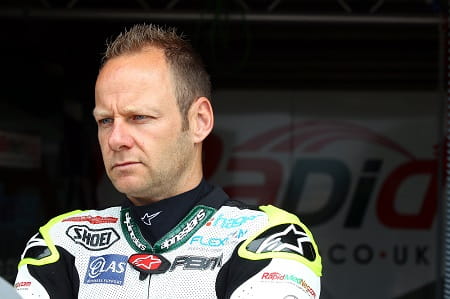 Shane Byrne has hit out at comments made by Josh Brookes in the post-qualifying press conference at Brands Hatch.

Brookes, who qualified third for this afternoon’s first race, commented: “I can’t help but think what sort of voodoo s**t Shakey is up to. He never seems to get a bad string of luck, it always seems to play into his hands. It’s devastating to see the championship finish with Kiyo lying on the floor this morning.”

The comments come after Byrne’s only rival for the 2014 British Superbike Championship, Ryuichi Kiyonari, crashed out of contention the morning practice session suffering a broken collarbone.

In the press conference, Byrne replied: “It’s not voodoo it’s consistency. To win a championship you have to be on the podium all the time. We’ve had our fair share of bad luck, I fell down and lost a big championship lead in Assen. I’m not so sure that any voodoo s**t has been going down, at the end of the day I’m here to win.”

However when asked about Brookes’ comments afterwards Byrne hit back, saying the Aussie needs to ‘get himself together and be a little more professional’.

“I think it’s disrespectful. He’s got a bike that has won the championship before, if he had done the job I’d done he’d be fighting for the championship too. I’m really annoyed that he’s come out with that, it’s a really frustrating thing to sit and listen to. I know what I’ve done this year and if it wasn’t in a showdown format I’d have already won the championship anyway, it’s not as if I have fluked it just because there has been an accident. I didn’t go and push Kiyo off, Josh needs to get himself together and be a little more professional and respectful. If the shoe was on the other foot I wouldn’t be doing it. I’m a little bit miffed that he said that in a press conference but I’ve got three races to try and win so I’m over it, I’ve had my rant.

“My objective is to win three races this weekend and whatever happens, that’s what I’m still going to try and do.”

Brookes also made a dig at Byrne in TV interviews after the session, stating that he was running his Suzuka helmet was in support of Ryuichi Kiyonari.