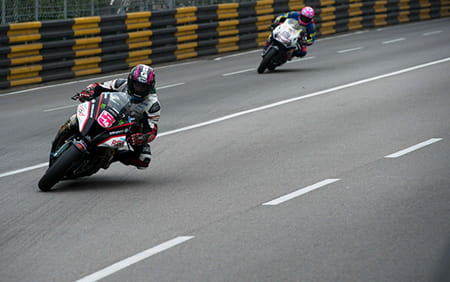 Thirty-year-old double British Supersport Champion Easton made the infamous Chinese road race look relatively easy, having first secured pole position aboard the Kawasaki on Friday. Then, during the 12-lap event, the 2014 BSB Rider's Cup Champion was never headed as he steadily built a lead lap-by-lap before finishing the race more than 14 seconds ahead of eight-time Macau GP winner Rutter.

It was Scotsman Easton’s fourth Macau GP victory, adding to his successes in 2008, 2009 and 2010 before serious injury saw him miss the 2011 race. He said: "To come back after three years and win again is fantastic although I didn't expect it to be quite so easy. I knew my wife and my little boy were watching back home so I had to do it for them. It was a case of just getting my head down and building a lead and I was comfortable putting the laps in. Thanks to the team, this is a great way to end the season on a high."