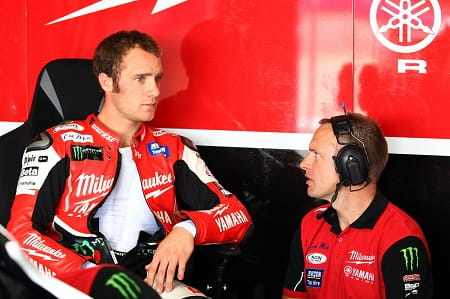 Hopkins returned to the British Superbike Championship following a year away from racing but was unable to replicate his title-fighting form of 2011, leading to the American losing his ride at the end of the season.

According to Bike Social sources, 26-year-old Bridewell is favourite to join the Tyco-backed squad after a strong season with the Milwaukee Yamaha team saw him steal third in the championship from team mate Josh Brookes at the final round.

Rumours the team will switch to BMW machinery next season ran wild this weekend as Michael Dunlop announced he’d lost his ride with the German manufacturer for the 2015 International Road Racing season.

It’s not yet clear whether they will retain the services of Josh Waters; the former Aussie champ struggled at the start of the season but went on to win two races for the team, concluding the year with 67 more points than team mate Hopkins. Taylor MacKenzie, who rode a GSX-R600 for the team in the Supersport class, has confirmed he will not be riding for the Northern Irish outfit next season.

Bridewell is also believed to be in talks with Halsall Racing, with whom he took two podiums in 2013 before switching to Milwaukee Yamaha for the final three rounds.