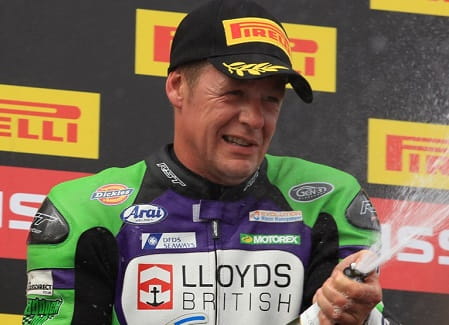 Falling in the closing stages of Friday’s free practice, the Nottinghamshire rider suffered two broken fingers on his right-hand.

Starting from the third row in the first race, Walker rode to a credible fifth place battling with Milwaukee Yamaha’s Tommy Bridewell. Walker found his fingers to be hurting in the closing stages so his team softened his throttle spring for the second thirty-lap battle.

Starting on the front row, Walker shot off the leading pack and battled his way into third. Finding his GBmoto Kawasaki ZX10R a bit easier to ride after the changes made by the team, Walker maintained his pace to cross the line in third position to claim his second podium of the year, elevating him back into the all-important championship top six.

“I was chuffed to bits with race one, battling to fifth position” said Walker. “I struggled in the last 12 laps with the throttle because of my finger. A lighter throttle spring helped me in the second race but to be honest I was expecting it to be a bit more difficult! I didn’t get the best of starts either but got the better of Easton early on which was importan so I dug in after that. In the first race I struggled to keep the throttle wide open but the team completely transformed this for the second race.

“I’m so happy for Lloyds British GBmoto to be back on the box. A good weekend for me…Old but Gold!”