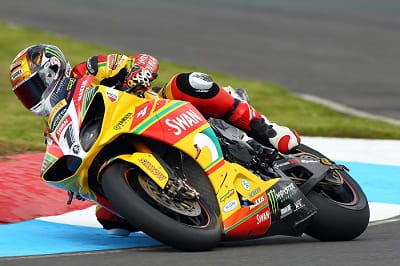 BSB star Tommy Hill has made the shock announcement that he will be taking a break from bike racing in 2013.

The star who won the BSB title in 2011, and finished third in 2012 put this statement on his website earlier. It;'s here in full.

He said: �It is with great sadness that I will be deciding to have a break from the sport in 2013. After a yet another hard fought year. I have been trying long and hard over the last few months to make a step up in the sport, I have started to realise the difficulty and what funds it takes to allow me to excel from my current position and move forward with my career. I have spent several years now riding at my current level, and sacrificing everything. "Winning the title last season I hoped would have given me the opportunity to secure a ride in a higher tier. Over the last few years we have seen the British Superbike Championship grow in stature and gain a bigger following, but there comes a point in anyone's life when they want to move forward, or feel they need to have a break from whatever they are doing in life. As you may know I have sustained some big injuries over my years of racing and have missed only one racing season since I was 7 years old. "To succeed at some things in life you have to be selfish, or some may say driven, and for many years of my career I have been just that. Eat, sleep, drink racing. From the time the alarm goes off, I'm training, dieting, putting unnecessary pressure on myself at times, not to do things until I get a result. Basically revolving every day to day activity around my racing. I have or may take my racing too seriously at times, and have always made my racing come first. But there comes a point when we may all need to take a step backwards and realise there is more to life�"  Looking forward, this may come as a shock to a lot of people, supporters and fans out there. But I really hope I can keep involved in the sport throughout 2013, either with a Championship, or manufacturer, passing my knowledge over, or doing some track-days and see what can potentially happen in 2014!."  "In the foreseeable future, I will continue with my design business (Imagedzign) give tuition on track-day's and possibly continue to keep in contact with race teams, and riders within the business over the next year. And basically enjoy my off season and try to relax a bit�Once again a massive thanks to all my supporters out there, every, race, dealer, track-day or promotional event I have attended this season has been great, and have always had a fantastic reception. A huge thank you to my fans my team and all my sponsors for their continued support throughout 2012."

From all at Bike Social we wish Tommy the best of luck.