Joe Francis: "In five years I would like to be where Marquez is now" 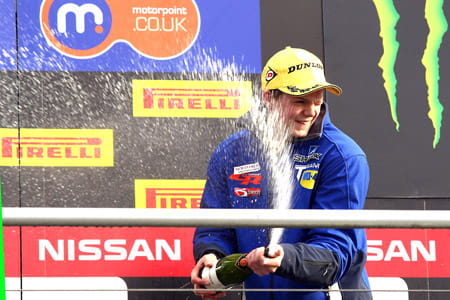 At just 15 years old, Joe Francis already has 7 motorcycle racing titles to his name. Last year he challenged fellow Bennetts-backed rider Kyle Ryde forthe national title. Bike Social caught up with him ahead of the third 125 BSB round at Oulton Park.

He currently is in his second season in the 125 Championship, but this year rides a 4-stroke Team WD40 Honda. “The bike is much easier to ride, especially with the engine breaking, which means I can break a lot later than before. Also, with the smoother power delivery I can get on the gas about a metre earlier.”

He says his aim is to finish in the top three of the Championship: “Obviously I would like to win, but this is the challenge that I’ve set myself”. However, the lad who he calls his main challenger, Tarran Mackenzie, has beaten him in both the opening races, with Joe finishing second both times. “In the first round we had a problem with the engine and we couldn’t get above 5000 revs. Then for the second round at Thruxton we struggled with straight line speed – the KTM has 8mph more on the straights – so hopefully on a more technical track we will be able to get the upper hand.”

Joe, who was first discovered through the Bennetts Biking Dreams Campaign, is still in school at the age of fifteen. “I have to stay behind an extra hour each day so that I can catch up on my school work during the week.

“It’s important to stay focused on my training and fitness too and I just work towards the next race. During the race weekend I have my head down and keep myself to myself.” This must be working, as apart from last year, Joe had won every Championship in which he had competed, with his career highlight being winning the Aprilia Superteens Championship.

As the bikes head to one of Joe’s favourite tracks, Oulton Park, with Snetterton and Assen being his others, he stands second in the Championship. “Casey Stoner is a big inspiration to me, it was a big shock when he retired. In five years my dream would to be where Marc Marquez is now.” We wish him luck!