Glen Richards hopes to have stronger defence than San Marino 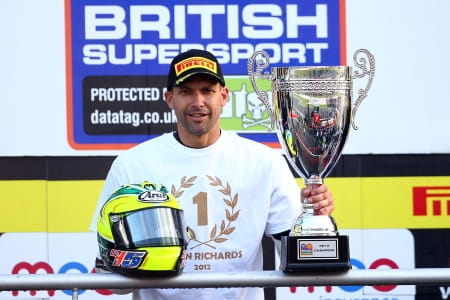 Set to celebrate his 40th birthday later this year, Glen Richards is looking to have more to celebrate by defending his British Supersport Championship on the Smiths Racing Triumph. He’s looking stronger than ever and is ready and set to take on the young guns snapping at his heels at this weekend’s season opener.

“I'm looking forward to the new season but I know I've got a massive job on my hands to defend the number one plate,” says Glen. “There have been a couple of fast guys move out of the championship but you just have to look at who has come in and it will be no easier this year.”

2011 title-winner Alastair Seeley on his Gearlink Kawasaki is one of the aforementioned guys, as well as 2002 winner Stuart Easton on the Mar-Train Yamaha, both of who return to British Supersport from the British Superbike Championship this year. Richards is ready though and has been putting in the hours testing.

“We have been testing on the new bike and although it's been hard work to get where we want to be, it's all coming together and I know the brand new Triumph Daytona 675R will be good,” he continues. “My main priority is to win the title again this year and I'm focusing hard on that."

It’s not just the other riders on the track that Richards has got on his heels, his team-mate is Billy McConnell who isn’t a stranger to getting close to the title. With riders such as Ben Wilson, Glen Irwin, Taylor Mackenzie and Jason O’Halloran on the grid too, the competition will be fierce in this year’s no-holds-barred Supersport series.

We can’t wait for the action to get underway this weekend at Brands Hatch!