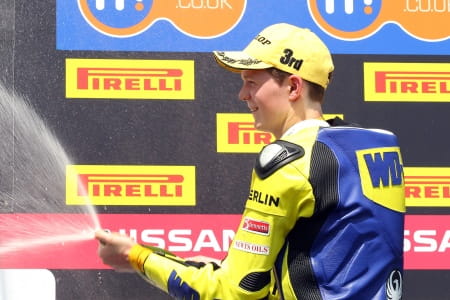 Chester teenager Joe Francis has opened up an 11-point lead in the British Motostar championship after clinching a fifth place finish (third in class) at Knockhill this weekend. The Team WD40 rider started second on the grid after just missing out on pole to Joe Irving.

Championship rival, Tarran Mackenzie, failed to start the race after qualifying third, giving Francis the chance to capitalise on points, but it was an advantage that Joe struggled to build on. Unfortunately, while running in second place, he hit the curb and ran into the gravel rejoining in tenth, making it difficult to climb back to the top of the pack.

Finishing fifth, Francis said: “I had a good start to the weekend; I was quickest in Friday practice and really close to pole on Saturday. I’m gutted with the race result, but I’m looking forward to getting back on the bike at Snetterton, where hopefully I’ll make up for the mistake I made here.”

Speaking of race winner, Jordan Weaving – who switched from a 125cc Honda to the KTM Moto3 machine for Knockhill – Francis added: “I think he’ll be up there from now on, we knew he’d be quick from the test but hopefully I’ve got enough ground on him now to be able to be ahead of him come the end of the season.”