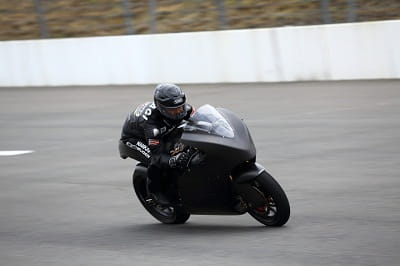 This is the bike that TT legend John McGuinness hopes will take him to the top step of the podium in this year’s TT Zero, the new updated 2013 Mugen Shinden.

The new all electric-powered bike, called the Mugen Shinden 2, was spotted testing in Japan. It was undergoing final shakedown tests before it’s put in a crate to make its 5900 mile trip across the sea on its journey to the UK.

The new bike will be run by the Honda Racing team for Mugen out of Honda Racing's UK headquarters in Louth, and then eventually make it to the Isle of Man TT for the TT Zero first practice on Friday May 31.

Mugen has allegedly spent £3 million on the Shinden project, and this new bike features an all new chassis, more power, and the bike comes in a lot lighter on the scales too according to Mugen. It’s seen here in prototype bodywork, the finished bodywork hasn’t been fitted yet.

McGuinness broke the elusive 100mph lap record for an electric bike last year, lapping at 102.2mph, but was beaten to the win by Michael Rutter on a MotoCzysz E1 pc which lapped at 104.056mph. 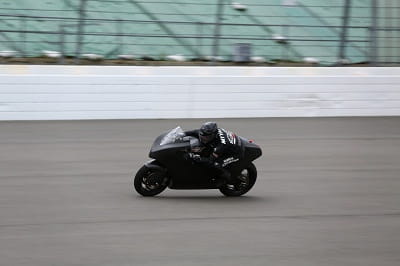 Rumours abound that MotoCzysz is facing financial difficulty but boss Michael Czysz said on Twitter only yesterday that he would be racing and that last year’s winner, Michael Rutter, is on for riding the bike again in 2013. MotoCzysz’s tweet read: “’13 TT Zero will be United States vs Japan illustrating next gen motorcycle technology. America lost the race 50 yrs ago.”