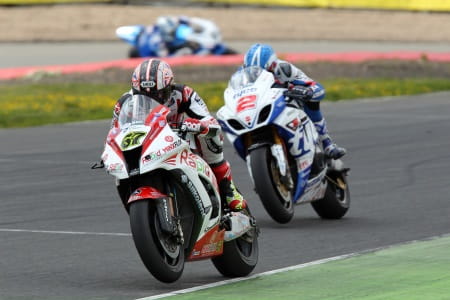 British Superbikes is back this weekend as the series heads to Snetterton for round five of the championship. Three time champion Shane Byrne will be looking to maintain his championship lead at the Norfolk circuit after winning six out of eight races so far this season.

There are however a number of riders eager to put a stop to Byrne’s domination. After three second places in a row and only finishing off the podium twice this year, Australia’s Josh Brookes is perhaps one of the keenest to beat the Kent man as he looks for his first win of the 2013 season. Samsung Honda’s Alex Lowes will be keen to make up ground lost as he fell in the first race at Knockhill and took his first non-podium finish of the season in the second while fourth in the rankings James Ellison is desperate for a pair of strong finishes after failing to score points in three races so far this year.

Last time out at Knockhill saw a resurgence of Japan’s Ryuichi Kiyonari, who took his first two podiums of the season at the Scottish circuit. However at the recent test at Snetterton the Samsung Honda rider was over 1.5 seconds off the pace of fastest man, Jakub Smrz. Smrz will be looking to kick start his season off the back of the successful test after a difficult start to the year on the Padgetts Honda.  As usual with the British series, racing will be close and the weather may very well play a crucial role…