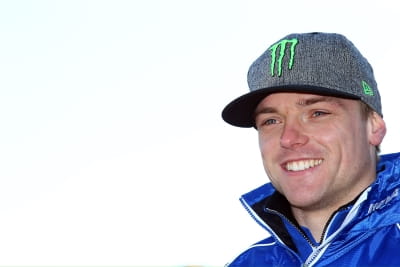 We’ve started the countdown! In just two weeks’ time, the 2013 British Superbike Championship kicks off at Brands Hatch, and while all eyes will surely be on defending champion Shane ‘Shakey’ Byrne and former champ Ryuichi Kiyonari, we’ve got a feeling we’ll be seeing Alex Lowes on the podium too.

Lincoln-based Lowes finished fourth in the 2012 series with Team WFR and was fastest on-track at the recent official pre-season test at Donington Park aboard the Samsung Honda. We caught up with him at the rain-soaked Snetterton 300 circuit for a quick chat before the final pre-season test…

Q. You were consistently in the top three at the Donington test, what are your expectations for this year’s championship?
A. I’m really looking forward to this year – it’s been a long winter! I have a better bike this year too so I really think I can go far this year and challenge for the championship!

Q. How do you stay focussed throughout the year?
A. When there is a race coming up, it’s pretty easy – I know exactly what we’re doing and what we are aiming for, so staying focused is fine. During the winter it’s a lot more difficult, especially when it’s dark and it snows, so I spend a lot of my time with my brother in the gym.

Q. Who would you say was your biggest rival?
A. I think there are quite a few, obviously my team-mate Kiyo who is looking very strong, and Shakey being the reigning champion of course. There are five or six other guys that will be fighting for the top too, so it will be close this year and I’m really looking forward to it.

Q. Team-mate Kiyo won three BSB titles. Does that put pressure on you?
A. No I don’t think so. If anything, the pressure is on Kiyo to beat me! I believe I’ve got the speed and if I work hard, I know I’m going to be in with a chance to win the championship this year. I do think I can learn a lot from Kiyo, we’ve done only a few tests so far, but I’m keen to learn from the triple British champion and improve throughout the season.

Q. How are you getting on with the new team?
A. <laughter from the garage as they are stood listening!> We’re getting on great! They’re a good group of guys and they are really good at what they do. We have a laugh together, which is important too.

Q. How are you finding the bike?
A. It’s a really good bike, it’s not too different from what I rode in 2012 so I’m already used to it, but like I said I think it’s better than last year’s. Obviously, we’ve not had much chance to push it yet as there have only been a few tests, and until the first race at Brands Hatch I won’t know for sure, but I’m confident that I can do great things with it!

Q. What do you love so much about BSB?
A. I like the fact that the championship is really close and that a lot of riders can win. Obviously the way BSB works with the ‘showdown’, the championship is pretty much decided in the last race, so every round is exciting and I’m really looking forward to a close race again this year. As a rider, it’s more enjoyable when you win and I believe I have every chance to do so.

Q. Do you and your brother Sam [who rides in World Supersport] exchange tips and tricks?
A. Sam, Leon Haslam and I train together and we share a lot of our experiences. We live together and we talk all the time – Sam knows me better than anyone and vice versa, and it’s really helpful to have someone there who knows what you’re going through!

Q. You’ve got some experience in WSBK with Castrol Honda in 2011, how does BSB and WSBK compare?
A. I think BSB and WSBK are pretty similar, obviously WSBK is a little faster. When I was in WSBK, I didn’t really have a fair crack at the championship, but I really enjoyed it.

The BSB season opener kicks off at Brands Hatch, Kent on 5-7 April.