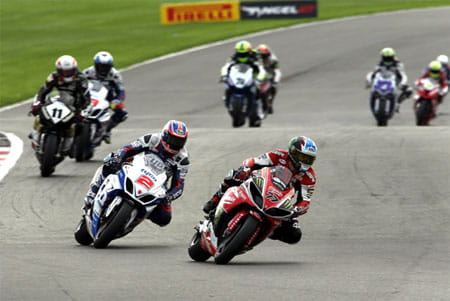 The 2014 British Superbike calendar has been announced and once again will be held over twelve rounds with eleven in the UK and Assen as the only exception. The love-it-or-hate-it ‘showdown’ system remains for another year, with the first 9 races comprising of the “main season” and the final three the title fighters’ showdown.

There have been no additions to the calendar for 2014 and few other major changes, with the exception of Thruxton moving from its usual early season spot to the first weekend in August. The first round at Brands Hatch has been re-instated with its traditional Easter weekend slot and the three showdown rounds will again be held at Assen, Silverstone and Brands Hatch with Donington Park as the end of the “main season”.

Brands Hatch will once again host three rounds, the season opener will run on the Indy circuit and the summer round and showdown finale will run the longer, Grand Prix layout. Oulton Park will host two rounds, the second round of the series on Mayday Bank Holiday and the seventh round in August, which will see three races contested at the Cheshire track. The final round at Brands Hatch will also see three races as usual.