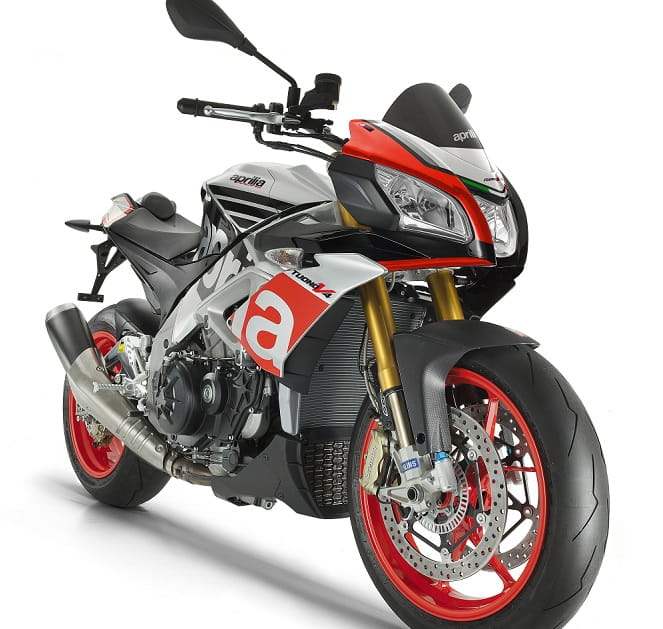 Aprilia has taken the covers off two new Tuono V4 models this afternoon at the EICMA Exhibition in Milan.

The Tuono V4 is a direct descendent of the Noale factory’s RSV4 Superbike, a machine that has won seven World Superbike Championships. For 2015 the Tuono has received an entirely revamped V4 motor with an increase in both engine capacity and horsepower. The Tuono V4 is now powered by a 1077cc V4 liquid cooled engine producing an impressive 175bhp, placing the model in firm competition with super nakeds such as Kawasaki’s Z1000 and KTM’s Superduke R.

The Tuono V4 1100 RR is represented as an ‘exceptional thrill machine’ and Aprilia reckon it’s the fastest bike in its category. The second version is named the Tuono V4 1100 Factory, which is largely equipped with components derived directly from the new RSV4 RF Superbike.

A more protective top fairing adds to the Tuono’s new look as does the new rail fairing derived from the RSV4. A redesigned headlight unit finishes the bike’s new look off. A number of comfort changes have been made, including a 15mm lower seating position and a new narrower handlebar.

Brembo brakes come as standard on both models with the Factory model also treated to Ohlins suspension.

The V4 1100 RR is available in two colour schemes, ‘Grigio Portimao’ and ‘Donington blu’ while the Factory version (as per the RSV4 RF) comes with the exclusive Superpole graphics.