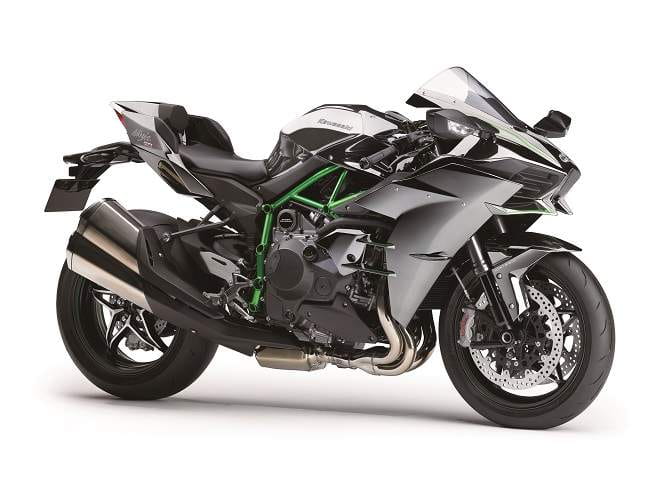 Just a month after the world was introduced to the rather eccentric Ninja H2R from Kawasaki, the Japanese manufacturer has taken the covers of the hotly anticipated (yet slightly more restrained) Ninja H2, which has been described as a: “A street model based closely on the closed-course model that would meet all market regulations.”

Sticking with the liquid-cooled, 4-stroke, inline four 998cc engine, the Ninja H2 is also supercharged, just like its crazy 296bhp sibling. However the important bit here is to understand that by “market regulations” Kawasaki are referring to noise and emissions standards and therefore this street version is restricted to ‘just’ the same amount of power as the ZX10R; 197.4bhp stationery, or 207.2bhp with Ram Air. That refers to amount of air being pushed into the engine while the bike is on the move, i.e. the faster the bike travels, the more power the engine develops. Still no slouch and it is guaranteed to accelerate quicker than a right-jab from Amir Khan. 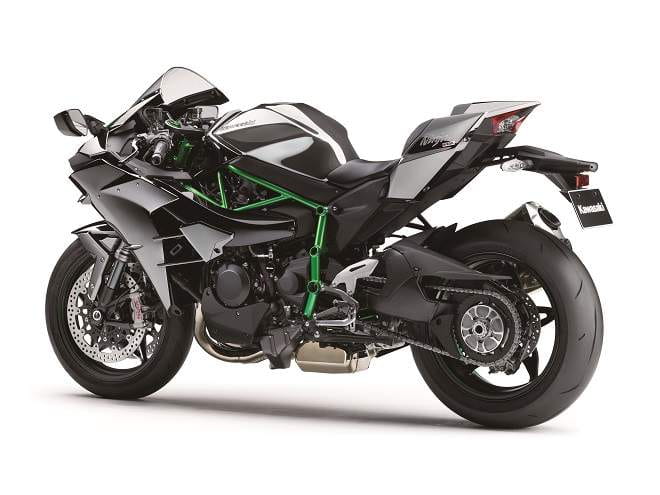 Dog-ring transmission is an under-used phrase but one that refers to a gearbox configuration commonly found in MotoGP or Formula 1. All the gears stay in place while the dog rings move, allowing for a lighter, smoother and faster gear change, all derived from and developed by Kawasaki’s Racing Team.

Technical know-how and resources have been pooled from around the Kawasaki Group including their own Aerospace division who assisted with the aerodynamic mirrors for example. Even the supercharger was designed in house.

The trellis frame made from high tensile steel allows for stability at high speeds yet still allowing the bike to corner effectively coupled with its shorter wheelbase. The single sided swing arm of the Ninja H2, a first for Kawasaki, allows the right-side exhaust silencer to be tucked in to the bikes frame. 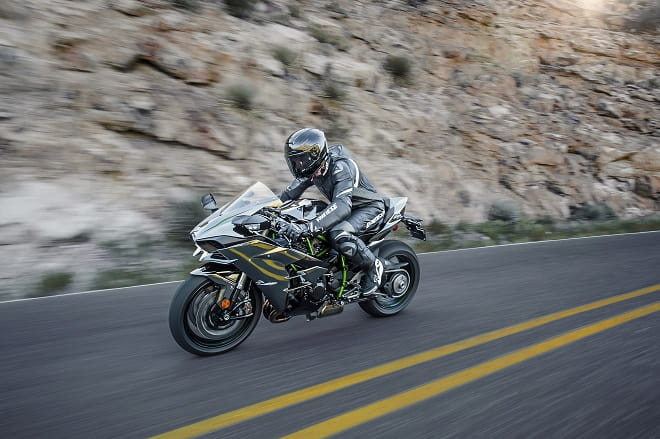 The Ninja H2, which is also known as the ZX1000N, takes yet more of its sporty heritage from the H2R with its racing suspension from KYB, 330mm Brembo brakes and aerodynamic bodywork. Naturally a sports bike with such carefully designed lines and drive should only be equipped for one and Kawasaki concur with no pillion seat or pegs available albeit the seating position appears more relaxed than the Ninja ZX-10R.

Other standard bits you’ll be able to find on the Ninja H2 include:

To see the Ninja H2 on track in a preview video, click here.

We understand that only a handful of Ninja H2's will be making their way onto British soil, possibly as few as 15 with a price tag of around £25,000 and a delivery date of April 2015. Get to your local dealer to discuss how much a kidney is worth.