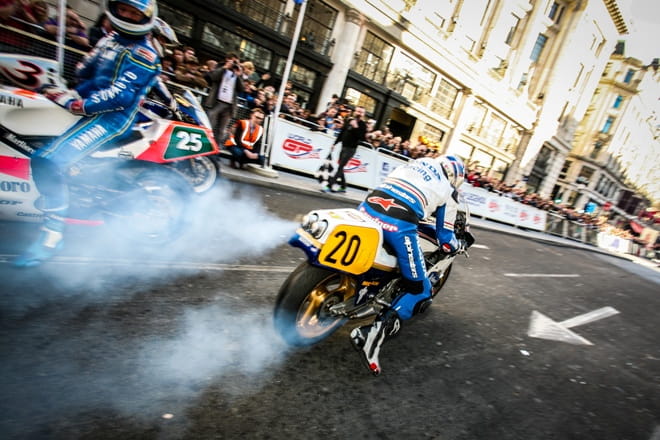 The event proper takes place at Jerez, Spain from 19-21 June 2015, and as the name would suggest, host of GP stars from the epic two-stroke 80's era will be doing battle on track once again over a weekend–long festival. Event ambassador Wayne Gardner, 1987 500cc World Champion, spilled a few names to Bike Social including Randy Mamola, Kevin Schwantz and Kenny Roberts, who are all set to lines up against each other next summer.

Rather than cutting any ribbons or standing behind a lectern, Gardner and fellow ambassadors Christian Sarron (1984 250cc World Champion) and 'Fast' Freddie Spencer (1983 and ‘85 500cc World Champion) were on hand to ride their respective race machinery up and down a 100 yard strip of tarmac in between Hamleys and the Apple Store. 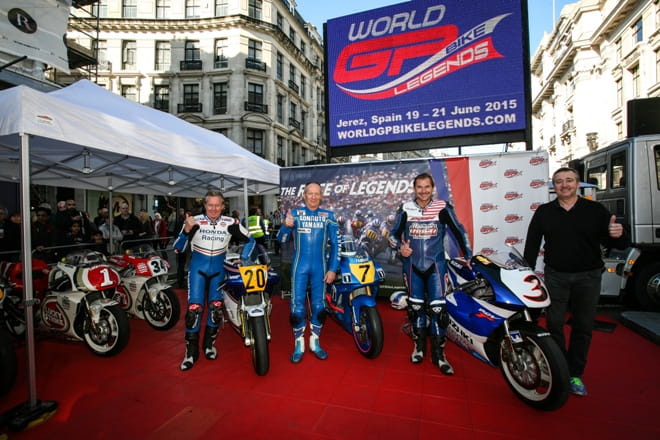 The sweet waft of two-stroke lingered in the Central London air while those lucky enough to witness it were offered a blink-and-you'll-miss-it 3-second dash. Nevertheless, to smell that smell and hear those familiar noises as they echoed around this part of W1 were worth every second. No wheelies, no burn outs but that didn't matter because, while they may be slightly more grey and round, as these Grand Prix racing heroes offered a bit of gas to their oh-so distinctive machines, every mobile phone in the vicinity were held aloft in a digital salute to a very much analogue era.

A large screen high above looped a montage of clips from The Unrideables film offering a brief education for those who stumbled across the barriered spectacle nestled amongst the retail emporiums. A footfall of 250,000 is usually expected down Regent Street on a standard Saturday but today some 400,000 were expected so, despite the road being closed to buses and taxis, the retailers were in full support. 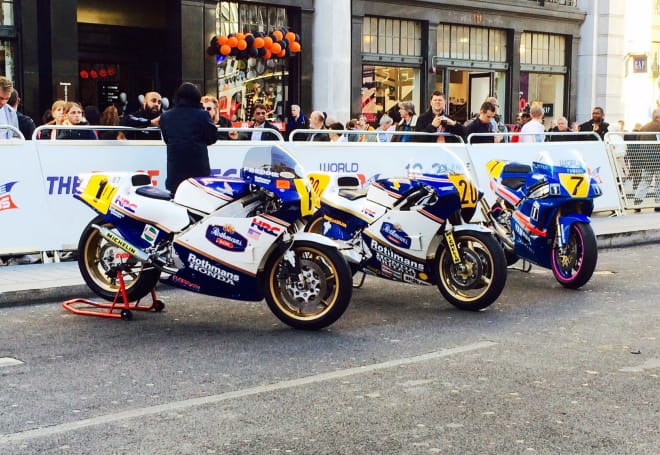 How was the idea conceived?

The World GP Bike Legends event is the result of a conversation between event organiser Nick Wigley and Gardner at the recent Goodwood Revival. Wigley is the man responsible for the likes of the Silverstone Classic and he told Bike Social that he was keen to get a bike-focussed version off the ground. He said, "The idea of a classic/historic racing festival stems from me wanting to introduce bikes to the Classic Silverstone event but the down time to amend all the curbs would take too long."

"So I was speaking to Wayne Gardner at the Goodwood Revival and he volunteered to get all the legends together", he continued.

What do we know about the event?

The three-day event will consist of many legends of motorcycle racing from the 70's, 80's and 90's with a full weekend of entertainment. As is traditional, practice will take place on Friday, qualifying on Saturday and racing on Sunday with 125cc, 250cc and 500cc races already confirmed. Wigley told Bike Social that more details about these and additional races will follow. Unlike Formula One or MotoGP, all race fans will be able to access the pits and get up close to the heroes of yesteryear. At least 3 bands on the Friday and Saturday evenings will keep revellers entertained and it promises to offer excellent value with a weekend-long ticket costing just €55 in advance including grandstand access and a programme.

How are Gardner and Sarron involved? 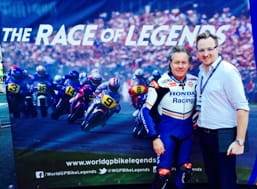 Both of the ex-World Champs are ambassadors of the World GP Legends event and just listening to them banter even before riding 100 yards in a demonstration and they’re clearly old friends with a sense of pride so when the lights go off then we can fully expect some close racing. They will all want to win.

Gardner told Bike Social, "Nick (Wigley) came to me with an idea and he wanted some advice so I helped him fill in a few gaps. I said what do you want and he said riders so I'm chasing them! I've had a lot if thumbs up so far from Randy to Kevin to Kenny, the idea is to get as many of the world’s best into the same race.”

He continued, “When the visors go down we'll give it a go and see what we can do but we're not going to go silly and throw ourselves down the road. It's all about meeting and greeting the personalities and their heroes of the past, seeing the exotic bikes of the 2-stroke era and replicating the 80s era and having some fun and having a great weekend.”

Sarron then followed, “I would never have said that I would be in Central London riding my old bike with such great friends as Wayne and Freddie. I've always felt Britain has always been the best for the support of motorcycle racing. I'm looking forward to the event in Jerez because this era of motorcycle racing was so special because there were so many strong characters and they had such skill. We were opponents but we respected each other too. So we are now looking to put on a good show for the public.”

“When I started racing the paddocks were open so we could spend time with the fans and this is now an opportunity for us to give something back to the current fans too. We will be going for the win because it is our feeling inside, we still have this personality and this character and we will be going for it but you know we still do not want to crash! I'll be riding the 500 of mine, it still gives me goosebumps. It is still a lot of fun to ride these bikes. But when we were racing we had to be quite modest, every time we opened the gas we used to be scared!”

“Last year I invited Wayne to the French classic Moto legend event and loaned him one of my bikes, we had a lot of fun, then he called me only three weeks ago and asked me if I wanted to get involved. How could I refuse?"

For more information about the event, head to http://www.worldgpbikelegends.com/