A brand new exhibition telling the story of motorcycling has been officially opened at the National Motor Museum at Beaulieu as part of the complete restructuring of the building to allow the museum to showcase many of its unique vehicles. A display depicting the Top 20 Motorcycling Icons was also revealed during the opening ceremony. 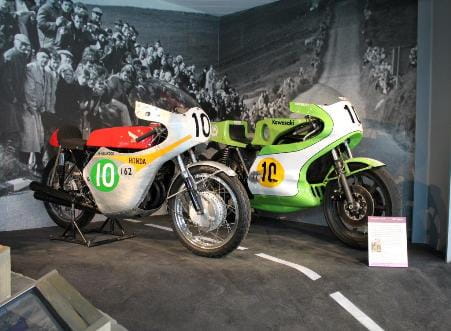 Appropriately called ‘The Motorcycle Story’ the all-new display on the mezzanine floor takes visitors on a journey through motorcycling history, from the early days of motorsport to 1960’s youth culture, utilising a clever mix of machines and various related objects and memorabilia to not only put things in context, but to bring the story alive.

Although, there are no new machines displayed, it is the first time they have been used to show their historical and cultural context, as well as showing how they have developed over the years as result of technology and sporting activities. 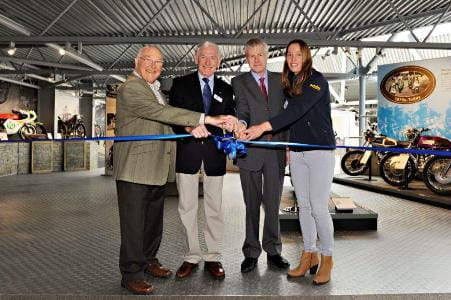 Last night’s official opening was conducted by the Hon Ralph Montagu on behalf of his father and founder (who was also present), who was assisted in cutting the ribbon by motorsport legend Murray Walker, trails legend Sammy Miller MBE and Becky Cook, Britain’s most successful female trials rider, who added a touch of glamour to the ceremony.

It was a particularly poignant moment for Walker, himself a successful competition motorcyclist, because his father Graham was the first curator of the museum having helped Lord Montague with its inception.

Walker then unveiled a plaque acknowledging his father’s role in the museums history, alongside a display case dedicated to his father’s considerable motorcycling achievements before retiring from active competition to commentate and starting Murray on the road to follow in his footsteps.

Part of the new display is the ‘Motorcycle Icons Wall of Fame’ a gallery featuring the top twenty riders as voted for by over 7,000 members of  the public at various motorcycle events this year, from an original shortlist of 48 motorcycling icons.  It included riders from all eras and genres of motorcycling, including a few motorcycle celebrities from the world of TV and film.

However, it was no real surprise to find that double world Champion Barry Sheene was in the number one slot when the curtain was drawn back by Sammy Miller and Becky Cook who were both fortunately listed in the top twenty saving any embarrassment! Despite his early demise, Sheene’s popularity remains high amongst all sectors of the British public as well as motorcyclists as the poll showed.

The museum has always had a stunning collection of some unique motorcycles which are famous in their own right such as ‘Old Miracle’ the 1912 Norton which was wheeled across the threshold on the official opening of the original motorcycle Montague display in 1956 by Geoff Duke who was world champion at the time. It is fair to say though until now the bikes have taken something of a back seat in comparison to some of the other exhibits, such as the land speed record cars like Bluebird. 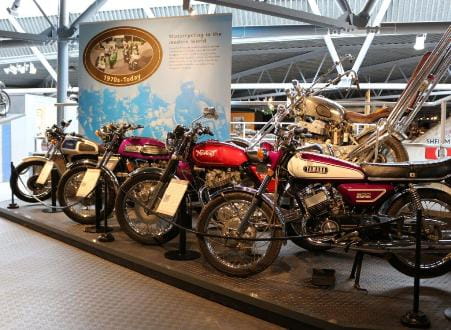 However, things have now changed with the bikes being displayed in a thoroughly modern setting, taking advantage of modern thinking in relation to displays and utilising modern technology to help educate as well as bringing in movement and a degree of interaction with visitors.

The revised gallery uses the museum’s collection to chart the evolvement of the motorcycle from the beginning of the 1900s when it was nothing more than a pedal cycle with a motor bolted in, right through to today’s modern superbikes. Like the cars displayed elsewhere in the building, the gallery shows many examples from the diverse wold of competition. 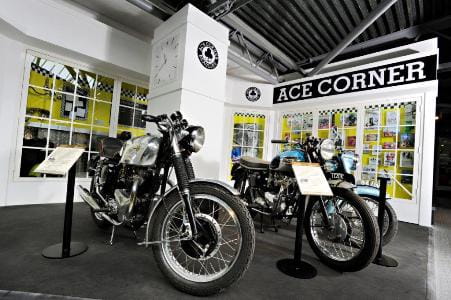 Likewise they have raided the archives and come up with some superb displays full of supporting artefacts including motorcycle clothing and sporting trophies, as well as some period motorcycle road safety items. In addition there is a section devoted to the British ‘Mods and Rockers’ youth culture of the 1950s and 60s and the Ace Cafe has been recreated in a small way to show cafe racer culture of the period.

After an absorbing hour looking around the exhibits there is no doubt that the Beaulieu team have done a magnificent job of modernising their motorcycle display and achieved their aim of taking the visitor on a fascinating journey through motorcycling history and the human quest for freedom, individuality and the desire to win and the exhibit is not to be missed.

The Motorcycle Story is now open and can be seen as part of a visit to the whole Beaulieu attraction which includes the National Motor Museum, World of Top Gear, Beaulieu Abbey, Palace House and gardens.