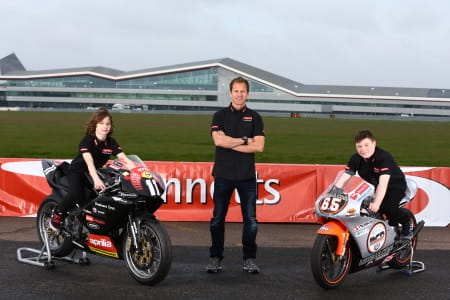 Owens’ prodigious record has seen him win back-to-back-to-back titles in the MiniGP classes between 2010 and 2012, before moving to the British 125cc championships with a self-run team in 2013. Despite his inexperience and a limited budget, Josh impressed racing experts and scored a fifth place in the final race of the season. With Bennetts backing, the youngster will join the experienced RCD Motorsport team for 2014, where he will receive expert guidance and a competitive race bike.

Despite his tender age, Skinner has British titles in the 50cc and 70cc MiniGP classes. Last year, as soon as he was old enough, he made a one-off appearance in the Aprilia Challenge, a prestigious one-make series that lists world champions Cal Crutchlow, Chaz Davies and Casey Stoner among its alumni. Riding a borrowed machine at a circuit he had never ridden before, the pre-teen Scot won on his debut to become the youngest ever race winner in the history of the championship. For 2014, he undertakes a full campaign and currently leads the championship after winning three races at the opening round earlier this month.

Paul Taylor, PR and Sponsorship Manager at Bennetts, said: “Spain is leading the way in terms of rider development but with two British road racing world champions in the UK last year, there is certainly no shortage of talent on our shores. That said, it’s tough for young motorcycle racers to attract support in the UK. When we put the shout out for young riders to contact us in October, it was with a view to making it as easy as possible for them to get in touch with a national company that may otherwise have seemed out of reach to them.

“As expected, we had an enormous number of entries and deciding which riders to back was an almost impossible task. We saw applications from some excellent young talent who we are sure will have great careers but we have decided to go with two riders who we think will benefit most from our backing and, after much consideration, are delighted to back Josh and Rory.”