Famous names line up for Goodwood Festival of Speed 2014

The 21st annual Goodwood Festival of Speed takes place over the weekend of the 26-29th June which should see around 150,000 attending over the weekend. A host of big names from the motorsport and entertainment world will parade, and often race, up the 1.16 mile hill climb course in front of Lord March’s Goodwood House. 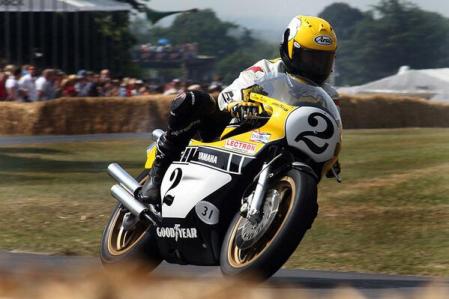 Historically the Festival of Speed has been a predominantly four-wheeled focused event but as each year passes more and more bikes with more and more famous faces are invited to head up the hill. The entry list for this years event has been announced and we’ve picked out the two-wheeled superstars from the line-up of current and past riders, racers and top names from motorcycling who will either be charging up the hill or entertaining the crowds with a range of skids, wheelies, tricks and stoppies.

Bike Social Ambassador, Scott Redding, has confirmed he’ll be running the 1987 ex-Freddie Spencer Honda 500ccGP bike but it won’t be his first time at Goodwood, having been on board a Metrakit Blusens 125cc in 2009 alongside Danny Webb. 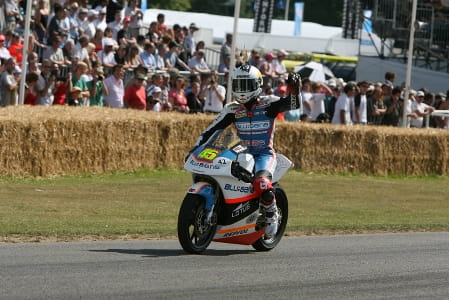 Meanwhile, adventurer, soon-to-be-TV-Chef and all-around top bloke Charley Boorman who will be riding his own BMW R1150GS Adventure, the very bike he rode in ‘Long Way Round’ with Ewan McGregor. Incidentally, this year sees the 10th anniversary of the duo’s epic adventure. Where did that time go?!

Charley told us, “Lord March came up with the idea, he asked if the bike was available and if I was interested and it’s a bit like if the Queen invites you for tea, you don’t say no!  It’s one of the hottest tickets in town. I rode up the hill with Ewan in 2005 and had a fantastic day. I was also invited when I did the Dakar too and rode my Dakar bike up the hill in 2006. Anybody keen on two or four wheels should get along, there’s an extraordinary amount of people who go along and there’s every category of motorsport and motoring available you can get really close to the action too, a bit like the TT – the feeling where you have almost unlimited access.” 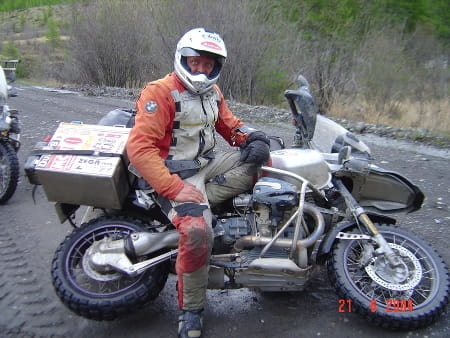 Ex-BSB Champion, Tommy Hill, will be back for third consecutive outing and he told us, "Once again it's great to be back at Goodwood. This year I am riding the brand new Hesketh 24, which has only just been completed and looks great. So it's exciting for me to be the rider showcasing the new bike up the hill in front of thousands of people"

The more familiar names among the many motorcyclists displaying their talents at the Festival of Speed are: (in alphabetical order)

And in a heavy link to motorcycling, John Surtees will have the 50th anniversary of his championship season celebrated with a drive of 11 cars and three motorcycles from his long career, including his championship-winning Ferrari from 1964.

Goodwood owner Lord March said: “It’s fantastic to be able to welcome names like Agostini, Spencer and Gardner back to the Festival of Speed. They have shown their addition to winning in a huge way during their careers and have achieved unprecedented success. I’m sure they will all be hugely popular additions to a fantastic line-up.”

Who are you looking forward to seeing, hearing, touching? To comment on this article  or !