Ten years ago Ewan McGregor and Charley Boorman were setting off from London at the beginning of an epic, 20,000 mile, televised, around the world motorcycle trip across 12 countries. This challenge is more commonly known as the ‘Long Way Round’.  McGregor and Boorman’s transport of choice was BMW’s R1150 GS Adventure and the resulting programme/DVD’s/books could well be attributed to the hefty splurge in sales and popularity of adventure bikes ever since.

Over the past ten years, the class-leading BMW has undergone several revamps as other manufacturers have stepped up their challenge to the German marque's all conquering machine and the brand-new-for-2014 model was only released last month. A Racing Metallic Blue loaned bike has made it into Charley Boorman's garage so we asked the adventurer for his views on this new water-cooled bike. 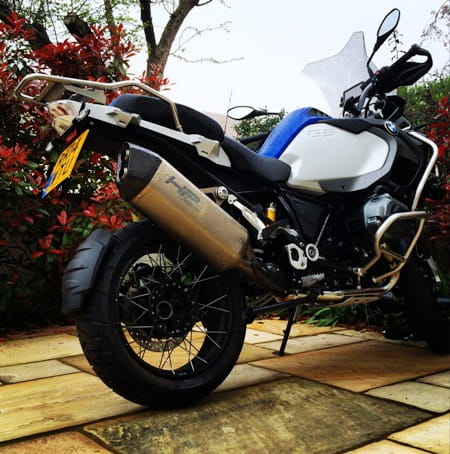 I had dinner with Ewan recently to celebrate the 10th anniversary and we were reminiscing about our favourite memories especially about the 1150. One of my lasting memories was before we even left for the trip, I’d already dropped the bike and I thought my god, this is heavy, how am I going to cope! The old bike was so top heavy with such a high seat compared to the new version. The most dangerous point about that bike was when it was standing still!

I’d first seen the new bike at a couple of shows over the winter and I just wanted to ride it! I was fascinated to see what they’d do with the heavier flywheel and power delivery which I knew was going to make a huge difference. Everyone was talking about the water-cooled engine and steering damper but I wanted to feel how the power delivery was going to differ. 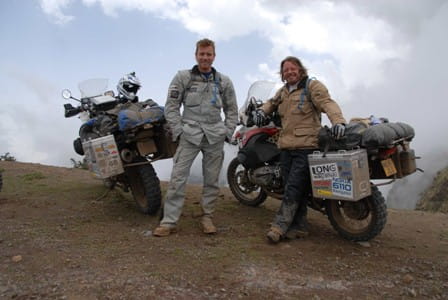 I first got to ride the new water-cooled GS (not the Adventure model) when we recorded the Extreme Frontiers show in America last summer and then again in Australia when we did our annual tour at the beginning of this year.  I was blown away by how advanced they’d made it; from the electronics to the traction control, the power delivery to the ABS, I was amazed at how precise and beautiful everything works.  On the GS around Tasmania it felt great around the twisty’s, and there’s plenty of them I can assure you. I’d be really surprise if you could find someone who could keep up on a sports bike! 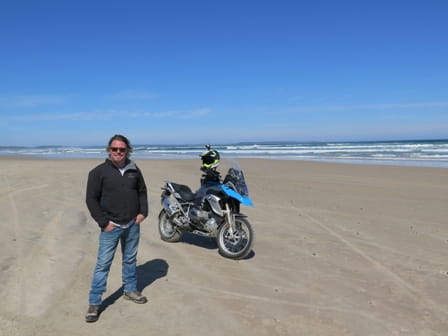 With the Adventure, it might sound a bit daft but it feels like you really ‘sit’ on the bike a bit more, the height isn’t as much of an issue and I know it’s something that put a lot of people off because it was so high.  BMW have really addressed all of the issues with the previous version of the 1200 Adventure, in fact I understand that the only thing they didn’t change was the oil filter cap!

But even versus the standard GS, the suspension is different, there’s slightly different styling and the geometry is sharper, and you can tell.  I haven’t yet given the Adventure its first proper off-road test but I live in London and it’s been amazingly easy to commute on, the handlebars are higher than almost all wing mirrors so you’ve a real advantage there. If you have the panniers and are going to use the bike around town then it’s only three bolts on either side so you can soon whip them off. Mind you, it’s easy getting used to them, just like carrying a pillion, after 5 minutes you’ll be used to it although take care when filtering because they aren’t higher than many wing mirrors! 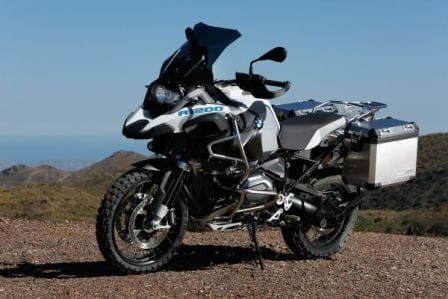 There are so many nice touches including next to the speedo where there’s a charge point you’re your phone. BMW’s sat nav is controlled by the wheel on the left-hand handlebar and has a nice big screen, it’s very interactive and easy-to-use.

It doesn’t feel as heavy because the weight distribution feels so ‘right’. The bike is just extraordinary – you wonder what the Adventure is going to be like with its weight distribution because of course it’s designed to be loaded up before travel great distances so the clever designer guys must have thought about the balance of the bike for those who aren’t going around the world and I think the 300 miles range/30 litre tank really helps with that.

The nice peg position helps with the seating comfort, which in itself is new. The bigger screen protects you a bit better from the wind.  Cruise control is really useful especially when you’re doing long distances, the bike seems to make everything easier by assisting you. You can relax your right-hand a little – light a cigarette, make the tea, check emails…of course I’m joking!

It’s got two standard engine modes; rain and road plus an optional extra three; Dynamic, Enduro and Enduro Pro – which turns the traction control off whist keeping ABS on the front wheel only giving you more control with braking on the back wheel. Not necessary in London I must add.

I’ve spent a lot of time on the GS but the Adventure is perfect, there’s nothing I’d want to change. Even when pulling wheelies (on a private runway obviously) – you’ don’t get the pull to one side like you did before because of the swing arm on the other side!