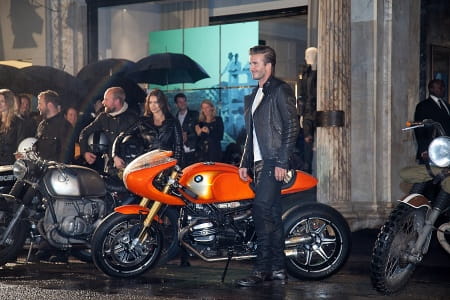 Footballer David Beckham brought London’s Bond Street to a standstill on Sunday evening as he turned up to launch Belstaff’s new flagship store in the capital. In front of crowds of photographers, the most capped outfield player in the history of the English game was unveiled as the new face of the famous English outdoor clothing brand.

Dressed from head to toe in leather biker clothing from the current collection,

Beckham was paraded alongside the BMW Concept Ninety and accompanied by a crew of riders and models also showcasing various items from the latest Belstaff range, having arrived in style on a variety of cafe racers and custom bikes.

These were not actors dressed up as bikers, but genuine motorcyclists – many of whom were riding unique BMW custom motorcycles they had built themselves.

Taking place as one of the highlights of London Fashion Week, the Belstaff launch event kicked off with the distant roar of powerful engines coming from the north end of Bond Street, followed by a collection of blazing headlights appearing out of the evening gloom.

The former Manchester United, Real Madrid, AC Milan, LA Galaxy and Paris Saint Germain player posed for photos before personally thanking each and every one of the riders who had braved the wet, autumnal conditions to help officially launch the new store in style.

Inside the luxury Mayfair showroom, the 38-year-old who recently retired from the game mingled with guests, including fashion magazine editors, pop stars, actresses, models and socialites.

Beckham, who owns twelve bikes including a Ducati Desmosedici and a Confederate F131 Hellcat Combats commented, “I’ve always loved motorbikes but I’ve never really been allowed to ride them, but now I’ve finished playing, it’s enabled me to spend more time on the bikes, which is great.”