Isle of Man warns: “If you want to race, get a licence” 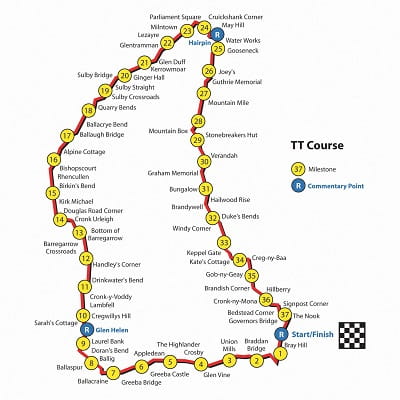 The Mountain course may be one of the world’s best roads and a dream destination for anyone with the love of two wheels. Getting to ride the circuit is one of the main reasons to head to the Isle of Man in TT fortnight.

But the Isle of Man Government is urging us not to head to the TT and ride like muppets during TT fortnight. Not their exact words but you get the idea.

The Isle of Man’s Respect Our Roads safety campaign kicked off this week, just two weeks before TT practice starts, and with the news that the Mountain section of the TT course will be made one way for the TT fortnight. There are no speed limits in the Isle of Man outside of marked limit areas.

Isle of Man Minister David Cretney MHK said: “During TT fortnight it is easy to forget that the Mountain Course comprises open public roads and is used by people going about their everyday business. We need car drivers and motorcyclists to be mindful of this – and to ensure they stay alert for the whole of the festival.”

Sidecar legend Dave Molyneux and Manxman and TT hero Conor Cummins have both backed the road safety message which will be backed up with leaflets, billboards and radio ads on TT Radio.

Cretney added: “I’d hope that with such well-known names backing our campaign, everyone who is in the Island for the festival will heed the ‘Respect our Roads’ message. My advice is if you want to race, get a race licence and enter the events.’

The Isle of Man’s Chief Constable Gary Roberts said: “The main aim of the Constabulary throughout the year is “keeping people safe”, and that’s very much our target during each TT festival. We work as hard as we can to ensure that everyone – visitors and residents alike – has confidence in our roads and the work we do during the fortnight.

He added: “We want people to enjoy the festival, of course. But this has to be done while paying heed to the very real dangers that come with the increased traffic on Manx roads during the two weeks. We want this year’s campaign to make people stop and think as they head out onto the roads during TT – they need to show respect, to the Island’s roads, to other road users and to the work of so many people who are involved in ensuring the TT festival is a success each year.”

Bike Social's Marc Potter's view on staying safe and on riding at the TT.