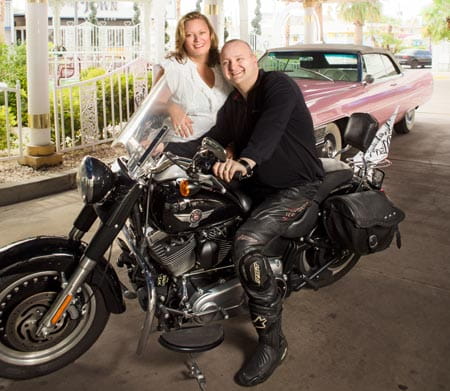 One Elvis impersonator, two Harley-Davidson motorcycles and a hot, desert location – it doesn’t sound like a traditional wedding, but it’s the one that Angela McCann and long-term partner Dave had been dreaming of! And this month that dream came true as Bennetts Biking Dreams sent the pair to Vegas to tie the knot in their own unique way!

The dream fulfilment began on Valentine’s Day this year when 2013 European Championship-winning Elvis impersonator, Gordon Elvis, turned up on their Birmingham doorstep to tell them the dream that Angela had submitted to Bennetts was going to be granted. They even had their family at the event – conducted by Elvis at the Little White Chapel on 12th June – as Bennetts organised for Dave’s Alabama-based sister and brother-in-law to travel across to the nuptials.

The couple started the trip and wedding preparations with a three-night stay at the famous Bellagio. Afterwards, Angela and Dave took to the open road for an all-expenses-paid 10-day motorcycling honeymoon tour across America.

When preparing for the trip, Angela said: “This is all still so surreal, it‘s been a wow factor from the moment we opened the door to Elvis Presley and it just keeps getting better. If getting married in Vegas was Dave’s delaying tactic it hasn’t worked! I know everybody’s wedding day is special but, thanks to Bennetts, this really is going to be one in a million and something to talk about for years.