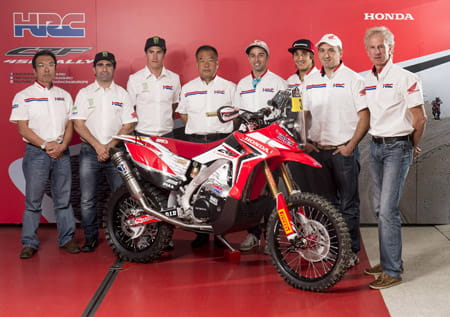 Honda has announced that a 24-year-old British rider, Sam Sunderland, will join its five-strong Dakar Rally team for 2014.

The Dakar Rally is one of the world’s most gruelling motorcycle challenges, which currently takes place throughout January each year in South America. The 8,000km off-road endurance race comprises dunes, mud, camel grass and rocks, and the distance of each stage covered by competitors can be as much as 900km per day.

The team begins its Dakar Rally journey later this month, with warm-up events in Argentina, Egypt and Morocco. Sunderland will start his testing in North Africa before competing in the Moroccan Merzouga Rally, while Rodrigues and Pizzolito will begin their countdown in the Argentine Desafio Ruto 40, and Barreda and Goncalves will compete in the Pharaohs rally at the end of September on the new Honda CRF450.

The Dakar Rally will prove as a good benchmark for the new machine, which is set to become tomorrow’s mass-production model.