At the beginning of 2012 Norton CEO Stuart Garner and Simon Skinner, Head of Design began work on a modern version of their old classic, the Norton Domiracer, and the resulting machine is a real looker! 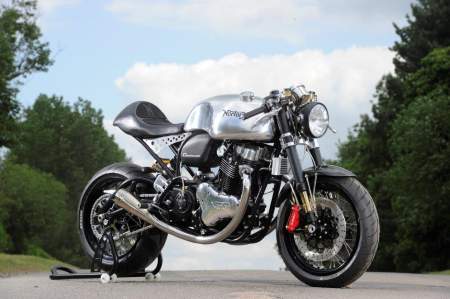 Only 50 of the cafe-racer style bikes will be released with the first deliveries expected in September and they will all roll out of the factory in race-spec as standard unless the buyer specifically requests a road-legal version. This  would therefore require indicators, a rear light and amendments to the very loud looking straight-through exhaust system.  However, it’s hard to imagine that the Domiracer will go anywhere other than into storage or display.

The bike uses a 961cc parallel twin engine based on the one currently used in the Norton Commando range.

The original Domiracer, a 500cc twin which lapped the TT circuit at over 100mph in 1961, was developed from the road version known as the Dominator by Norton’s engineer Doug Hale specifically for the TT but after a short life production ceased when Norton moved to London in 1962.  It used a featherbed frame from the road-going Dominator but with narrower frame tubes in front of the seat designed to improve rider comfort so when it was first tested, the rider Harold Daniell, described the experience as like “riding on a featherbed”.

Sticking to its roots, the new bike uses a Featherbed-style frame which has been designed in-house and joins the swingarm, suspension and fuel tank as other original parts.  The prototype in the image shows its performance orientation mixed with an emphasis on style with Brembo brakes, an alloy fuel tank and Ohlins suspension, although as Norton continue to develop the active-suspension seen on the TT race bike, the SG2, it is possible that the Domiracer will receive an upgrade.

Norton CEO, Stuart Garner told Bike Social, “We are doing just 50 bikes for release, already we have components in production and expect first deliveries in September.”

The final spec and prices are to be releases at the Domiracer’s launch party at Donington Hall, Norton’s new home, during the Donington Park Classic Motorcycle Festival in August.