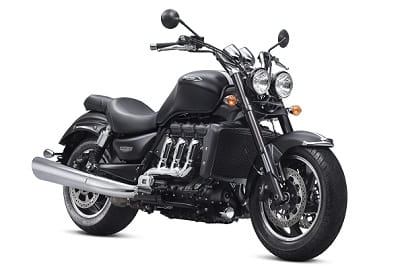 Not content with launching a host of new models for 2013 including a new Triumph Daytona 675, 675R, Trophy 1200, and Street Triple, there’s now a more grunty Rocket III Roadster and a new Rocket III Touring.

If you've ever ridden a Rocket III it's unlikely you would get off it and think it was lacking in torque, but just in case anyone ever did think the 2.3 litre engine was lacking a bit of low-down grunt, Triumph has now unleashed full power and torque in the first three gears!

The power and torque of the Rocket III’s 2294cc three-cylinder motor remains the same output at 146bhp and a whopping 163ftlb of torque, but they’ve lifted the electronic restrictions that all previous Rocket III Roadsters used to have, so for 2013 it will accelerate harder than ever in the first three gears!

Most of the bike’s chrome (radiator covers, pipes, lights etc) have been replaced with a black finish to give the bike a meaner look, there’s a striped paintscheme similar to the new 2013 Ducati Diavel paint schemes, and ABS as standard.

The Rocket III Roadster will cost £12,899 on the road and it’s available in black with either a white twin stripe, or black with a red twin stripe. 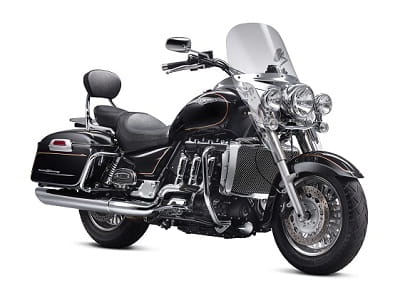 The Rocket III Touring is now available in black and red with single coach line or black with twin gold coach lines.

Both bikes will be available in March 2013.