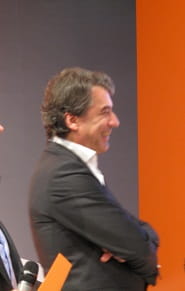 The new owners of Husqvarna have issued the following statement following the announcement that the CEO of KTM, Stefan Pierer, has bought Husqvarna from former owners BMW.

KTM staff are keen to point our that Pierer's own company, Pierer Industrie, has bought it, not KTM. Just so you’re clear, okay?

The ink on the contract has barely had chance to dry but the new owners have already announced there will be a new range of Husqvarna's launched at the end of this year.

The statement says: “The new Pierer Industrie AG company has taken over in full Husqvarna Motorcycles (Husqvarna Italy and Husqvarna US) from the BMW Group. In the next six months ahead, Pierer Industrie AG will evaluate the co-operation potential with the KTM/Husaberg Group.
A relaunch of the Husqvarna brand with a new product range is planned for the international motorcycle exhibition at EICMA 2013.”

We’ll bring you more when we have it.