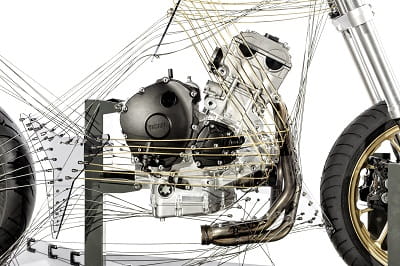 Yamaha's new three-cylinder road bike will be seen in finished form this year according to a senior Yamaha source.

The new Yamaha triple will be shown before the end of this year and go on sale in 2014!

He told Bike Social: “You will see the finished bike this year, much sooner than many people expected.” He refused to comment on exactly what we will see, however, admitted the new bike, believed to be a replacement for the ageing Yamaha R6, will take Yamaha on a change of direction by using a cross-plane crank, three cylinder engine that will form the basis of a new range of bikes.

The Japanese firm has been struggling with sales in the UK recently but the new range should ignite the fire needed to put the firm back on top. It’s aimed to give the same kind of feeling you get from the throttle to tyre connection with the cross-plane crank R1, but with a whole new character for the new range. Think of it as the basis of a whole new range of bikes from sports bikes, to replacments for bikes like the FZ8.

Sources inside Yamaha were keen to point out that the bike will be nothing like a Triumph in terms of technology or character. The British firm has of course lead the way with a three-cylinder motor, yet the Yamaha will have its own unique character and personality.

It is expected to use a similar system to the Yamaha T-Max which has a dummy cylinder to reduce vibration from its twin-cylinder motor, a theory first revealed first by our dearly departed friend and journalist Kevin Ash. 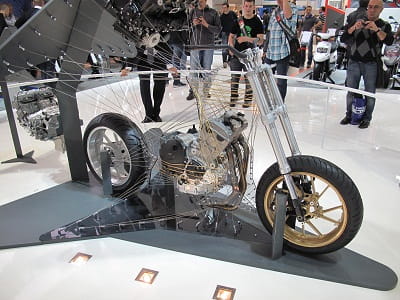 A prototype of the engine was shown at both the Milan and Munich international bike shows at the back end of last year, with a mock chassis made of wires surrounding the engine to illustrate what might be.

At the prototype’s unveiling, Yamaha’s Kunihiko Miwa simply said the new kind of torque character from the engine would: “Give riders the exact torque they want when they need it.”

Yamaha staff have refused to comment on the bike officially since the prototype’s unveiling, but rest assured you could be walking in to a Yamaha showroom by the end of this year and buying a Yamaha triple.

Yamaha has a brief history of using three-cylinder motors as illustrated by the Yamaha XS750 and XS850 which went on sale between 1976 and 1982.