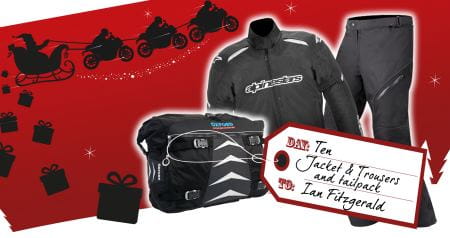 An IT worker, Fitzgerald placed his wish with Bennetts Biking Dreams as he had moved further away from work to accommodate the arrival of his first child. He now commutes to work on his Triumph Street Triple after taking up biking five years ago.

Fitzgerald dreamed of a new bike jacket and trousers as well as a tail pack to help him with his daily commute. He entered this dream to the Bennetts Biking Dreams website and was picked as part of the 12 Dreams of Christmas campaign.

On receiving his prize from Boorman, Fitzgerald said: “I’m just delighted to find out I’ve won something. The tail pack is going to help a lot as I’m currently using a dilapidated old rucksack. I try to commute to work on my bike as much as possible during the winter and with the temperature dropping, new bike gear is going to make a real difference.

“I didn’t expect to win and it is fantastic news. This is going to be my Christmas present as everything else is going towards the baby.”