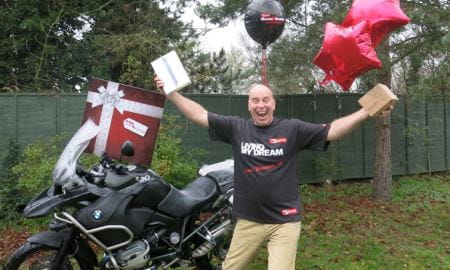 The Third Bennetts Biking Dream of Christmas was fulfilled today as retired Police motorcyclist was greeted with a delivery of a brand new iPad Apple Air and Drift HD camera.

Following retiring from the police force, Boast became involved in SERV – a service providing emergency transfers for medical products such as blood via motorcycle, more commonly known as ‘blood bikers’. Boast puts everything into training the blood bikers, he gives them a running commentary as they’re riding and films them too, giving them the footage on a USB stick.

He submitted his Dream on the Bennetts Biking Dreams website, which was to get his hands on an iPad so he could play the video back to the trainee blood bikers as soon as they’re off the bike. Bennetts also threw in a brand new Drift HD camera to further improve his feedback.

Neil’s also going to take it that extra step too, as he’s looking to set up a group with a few other ex-police motorcyclists to give their two-wheeled friends some help in improving their riding skills.

“I’m just absolutely overwhelmed. It’s brilliant, absolutely brilliant. I’ve lost a job recently and I put in for the dream thinking, ‘oh, I won’t win that!’ but you know I have” said Boast.

“I’ve ridden a motorbike since my dad put me on a field bike when I was about 6 years old and I just can’t get them out of my system.  I’ll never stop riding motorbikes, I used to be a police motorcyclist.

“My wife is over the moon, she’s absolutely chuffed! She knew I’d been struggling as I’ve lost my job so it’s just nice to get a lift.”