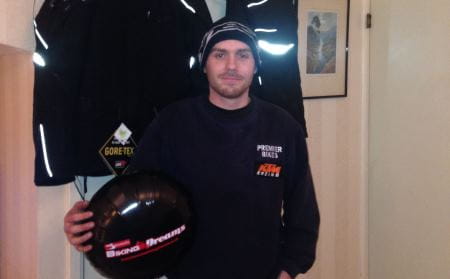 On the second day of their “12 Dreams of Christmas” competition, Bennetts surprised motorcycle technician, Michael Phelan with the news that his biking dream would soon become a reality.

Phelan dreamed of touring Scotland on his Triumph Tiger 800XC and fancied some Alpinestars Goretex riding kit to keep him warm while out there. Having never taken his driving test, Michael relies on his motorcycle as his sole form of transport and used to commute to work on two wheels every day until he started working at a Didcot KTM dearlership within walking distance from his house.

While walking does save him a bit of cash, Michael misses getting out on his bike so pledged to himself that he’d start touring to get some use out of his two-wheeled pride and joy. He'll be touring Scotland next year and recieved his Alpinestars gear in the post today.

“Now I only use my bike for pleasure riding I really wanted to get some use out of it” Phelan told Bike Social. “So I thought I’d start touring and someone at work suggested Scotland, which is where the idea for my biking dream came from.”

“It was quite a surprise as to be honest, I’d forgotten submitting the dream! It’s a great early Christmas present and now I have something to look forward to in the New Year!”