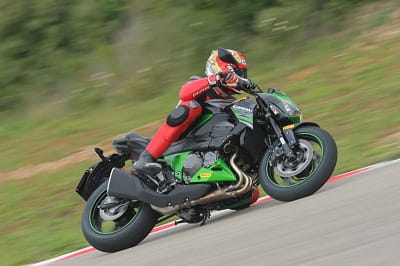 The world of motorcycling is changing and so are the kind of bikes we ride, and the kind of tyres we use.

With more and more of us watching the pennies and the pounds, the market for longer-lasting tyres is growing. But we’re a demanding bunch and not only do we want high mileage, we also want grip that’s near to a sports tyre, and wet weather ability for the kind of riders who want to ride all year round, especially in the so-called summers we’ve had recently.

Step in Pirelli’s new Angel GT, a tyre which the Italian tyre giant claims will last for an incredible 8699 miles at the rear according to an independent test on a Suzuki 1250 Bandit ABS.

They also claim it gives outstanding grip in the wet (see our test here), and gives sports handling characteristics. Some claim, when the tyre it replaces, the Pirelli Angel ST, was already one of the best in class alongside rivals like Bridgestone’s BT023 and Michelin’s brilliant Pilot Road 3, a tyre which I’m a massive fan of. 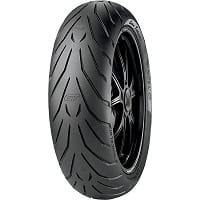 Pirelli arranged for a 6.2km long private test track at Nardo in Italy, a fleet of bikes ranging from a Yamaha FJR1300, Kawasaki Z800, Triumph Street Triple, BMW R1200RT tourer, and Yamaha’s R1 to put their claims to the test. The kind of bikes lined up show the versatility of the tyre and the confidence Pirelli have in it to be used on everything from a sharp handling naked like the Triumph Street Triple to a big fat touring bike.

Nardo’s handling circuit was designed by Porsche for testing cars and uses elements of the Nurburgring in places, and it’s an incredible place to ride with a flow of corners so staggering that I’ve rarely met a greater set of bends in 20 years of road testing around the world.

The track is made up of fast bends, tight banked hairpins and even has a third gear flat out, 100mph wheelie crest, so it really is a great test of the bikes, and more importantly the tyres.

On the Z800 the steering felt light, accurate and was hugely stable. The tyre never ever felt stressed even when put under some fairly typical track riding. 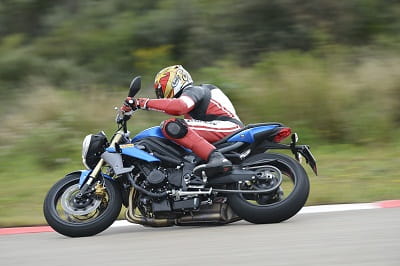 On a Street Triple it showed up the weight of me and how much the rear shock needed firming up, but gave great turn-in feel, was really stable under braking and gave plenty of sidewall grip to get the bike leant over.

Later I rode a Yamaha R1 for a session with the traction control turned off to give the tyre a real work out and left nothing but impressed.

It was visibly wearing faster at the rear than on some of the lower horsepower bikes like the Street Triple, but that’s no surprise when lots of bike journalists had been trying to put the rear tyre out of line in the interests of bike testing, all morning.

The tyre made the bike turn slightly slower than normal, thanks to its flatter profile when compared to a sports tyre, but was completely stable mid corner and gave enough feel to put in a decent lap on the twisty track.

Apart from some drivelines proving how hard the tyre was biting, I never had any movement from the rear even when trying to make it slide. Ultimately it won’t give you quite as much feel and grip as a sports bike tyre and you cant trusn in under braking to the apex like an out and out track tyre, but in the real world, on the road, the tyre will give more grip than most people in the world could throw at it. It's not meant to be a sports bike tyre, yet blindfolded I'd say that most peopkle would find it hard to tell the difference, especially on the road.

The fact that a Sports Touring tyre can cope so well on a sports bike like an R1 proves that Pirelli have blurred the lines between sports and tour.

I’d have no qualms about fitting them to any bike on the road, wet or dry. It's not a track tyre, and was never meant to be, but as an illustration of how much gruip these tyres give, they are very impressive in their class. I was incredibly impressed by them on the four bikes I tested and as an amazing all-rounder, few tyres give as much feel combined with the high mileage claims.

Pirelli’s Angel GT are available in all the usual sizes at a Pirelli dealer near you. See: www.pirelli.com