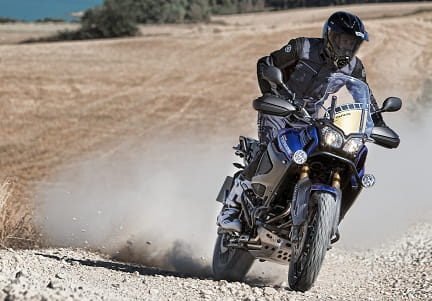 Don’t get too excited, but Yamaha has released new colours for some of its 2013 range, plus a tough-looking ‘World Crosser’ kit for the Super Tenere.

The range-topping Yamaha XTZ1200 Super Tenere is available with new graphics in white or blue, but more interestingly you can now buy a kit to beef up a standard Super Tenere to give it the same looks as the limited-edition World Crosser version.

Details are sketchy, but a quick look at the pictures shows what appears to be a new bashguard, engine bars, a new screen and a spot light kit with chunky bar holidng them on.

The Super Tenere is selling well in the UK and appears to be taking customers away from BMW’s R1200GS, and Yamaha are keen that with this kit they make a challenge to the tough looks of the R1200GS Adventure. No price is yet available.

Along with the kit there are also new colours for theWR125X and WR125R, and there’s a new mudguard on the XV1900A. Some MotoGP replicas of their sports bike range and a new MotoGP replica scooter will be launched today and tomorrow.

Yamaha are also revealing a new bike on October 2 at the Intermot Motorcycle Show in Cologne, though 2014 is believed to be the year that Yamaha really wows us with some new models.

Sales for the manufacturer in the UK started slowly in 2012 but good sales of 125s and the Yamaha R6 have pulled an early sales decline back in the latter part of this year.