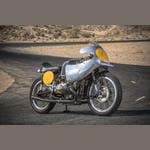 An ultra-rare BMW that John Surtees once described as being ‘one of the all-time greats of motorcycle Grand-Prix racing’ will be offered up for auction next year.

The RS255 is a supercharged Boxer twin with genuine BMW race history. Bonhams say the bike’s 1939 engine is mounted in an authentic factory BMW frame from 1951. It’s expected to exceed the price of the last BMW race bike Bonhams sold at auction – a 1939 BMW RS R51 which fetched 131,200 dollars.

Surtees, the only man to ever win Grand Prix and Formula One world titles, owns the very same year model BMW upon which Georg Meier won the Isle of Man TT on, and now on display at the BMW Museum said: "The power characteristics are very deceptive...this is a real racing machine."

Bonhams spokesman Nick Smith said: "Competition BMWs, particularly those from before and just after WWII, are increasingly gaining interest from discerning collectors,"