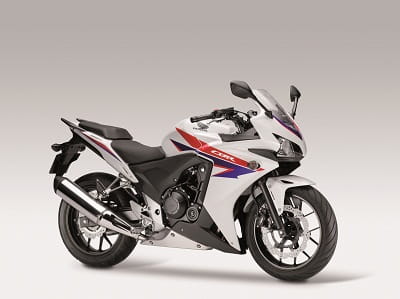 This is the bike Honda hopes will launch a new breed of young racers – the new 2013 Honda CBR500R.

The original CB500 launched the careers of riders like Leon Haslam and James Toseland when the CB500Cup took place in the mid-nineties. And with the new European Junior Cup set to use these bikes next year, Honda hopes the same thing will happen for kids. The winner gets a ride with Honda in the 2014 European Superstock Championships.

For the rest of us, the new Honda CBR500R is one of the best-looking sports bikes with a claimed 76.3mpg and a power output of 47bhp (35Kw) that falls in line with the new A2-licence category for new riders.

The bike features the same chassis, brake and 471cc engine set-up as the Honda CB500F, but gets funky race-style bodywork which mimics the style of the new Honda CBR600RR, and is influenced by the style of the Honda RCV MotoGP bikes.

The new CBR500R weighs in at a claimed 194kg when full-fuelled and has a 790mm seat height. We reckon it's going to be one of the best-selling bikes of 2013 and it looks fantastic.

It goes on sale next year. No prices have yet been set.