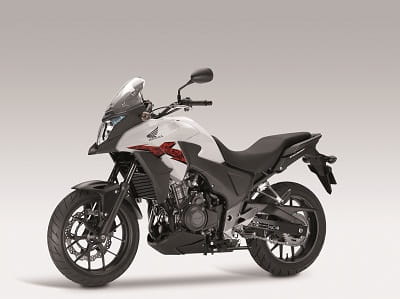 Honda has built a mini adventure bike called the CB500X.

The new 471cc twin-cylinder bike uses styling taken from the NC700X and 1200cc Crosstourer and adds it to an A2-licence friendly package making 47bhp, or 35Kw.

The new bike, revealed for the first time officially here, is designed to be a new rider friendly commuter and all-rounder with the spirit and style of an adventure bike.

Like the Honda CB500F naked bike and the new faired CBR500R, the CB500X uses a diamond steel chassis and shares most parts including wheels, brakes, and engine with the other bikes in the CB500 range.

The CB500X however gets longer travel suspension and a slightly longer wheelbase than its 500 brothers. It also gets a 2.5 litre larger tank than the others, putting it at 17.3 litres. Honda claims fuel economy of 76.3mpg in laboratory conditions.

As you would expect from an adventure style all-rounder, there’s a bashplate to protect the exhaust and engine if you decide to take it on the rough stuff.

The new Honda CB500X goes on sale early next year and can be seen in the UK for the first time at Motorcycle Live at the NEC.